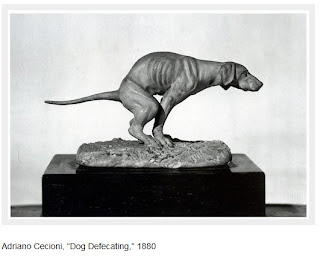 When Andrew Bolt and Tim Blair this morning noted the remarkable dance performance choreographed by Sydney University's Mikala Dwyer, who encouraged her players to empty their bowels on stage, the reaction at the Billabong was not shock so much as a warm nostalgia and hope for the future.

You see, many years ago, when the Professor was a youngster heavily into anarchic leftism and punk (and meaningless euphemisms as well), a particular hero was an American rocker, GG Allin, who was known only from reports in the underground zines and newspapers available via outlets like Euphoria Records and the Third World Bookshop. Allin certainly sounded just the shot to outrage bourgeois sensibilities, which is what being young and stupid is mostly about, as his party piece involved beating up random audience members and then voiding his bowels on stage.

American authorities were in the habit of arresting Mr Allin, the original scat singer,  who eventually took his own life and thereby missed seeing the fruits of the revolution he inspired. These days, exponents of the brown arts can get themselves on the government teat, where the lactations are very rich indeed. Ms Dwyer's grant -- one of them -- is on the bottom line:

For those whose eyes work not so well as once they did, the entry reports that Dwyer scored her $90,000 for promising to "create series of works that extend investigation into material responses to conceptual frameworks".

Apparently that translates as choking a darkie in a perspex bucket.

The first reaction of most will be outrage, but that would be a mistake. The arts community will trot out all sorts of dills, many in bow ties, to assert that the majority of their countrymen are philistines and cannot appreciate the transgressive beauty of a fresh-laid log. Our nation will become a laughingstock, they will continue, if hip cadres cannot afford to extrude meaningful works. Mind you, the Italian sculptor Adriano Cecioni manage to cover this territory without benefit of grant more than 130 years ago. That's his sculpture at the head of this post.

Well let them say all of that and more, and let them continue to snaffle their grants until a new government sets to work on both the arts and the ABC. In the meantime, and clearly inspired by the likes of GG Allin, we must urge the transgressive elite to take the next step and begin beating the daylights out of their black-clad audiences. Two-fisted luvvie-on-luvvie action, with elbows, man-bags and poo buckets flying everywhere! Black eyes and bleeding scalps all over the shop -- and no doubt worth at least another $100,000 or so in tax dollars. Won't that be fun.

For those interested, poo-art pioneer GG Allin explains his oeuvre below:


UPDATE: The Age, where shit for brains is a pre-condition of employment,  gives Dwyer's exercise in "material responses" a predictably sympathetic gloss.


ACCA director Juliana Engberg said the centre exists to support each exhibiting artist's vision. ''Of course, contemporary art is sometimes very challenging, but ACCA's role is to work with challenging ideas,'' she said.

''When Mikala brought this idea of a performance and film dealing with material transformation and ritual to us, we evaluated it as a key and bold move in her practice, one that links to a long artistic legacy looking at alchemical transformation and magical performance. The work, while challenging taboos, never becomes sensational or gratuitous. It's wonderful, powerful work.''

The exhibition runs until July 28. accaonline.org.au

Email ThisBlogThis!Share to TwitterShare to FacebookShare to Pinterest
Labels: GG Allin, if the dance had included naked 12 years and a photographer perfection would have been achieved, poo punk pioneer