English, our wonderful tongue, is forever changing, and not only when the board of the Macquarie Dictionary convenes an emergency meeting to justify the abuse of a decent man by a slattern who helped steal the funeral funds of miners' widows and waifs. At the ABC and on Twitter, sometime Q&A guest Stella Young delivers a pithy lecture on words and their latest, officially approved definitions: 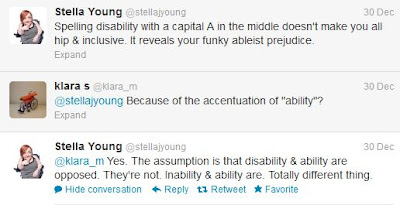 Klara S. would be well advised to argue the toss no further. The irate Stella has a reputation for being short
Posted by Bunyip at 3:48 PM 2 comments:

WHY does Silly cartoonist Shakespeare have Bert Newton peering through Kerry Packer's window? 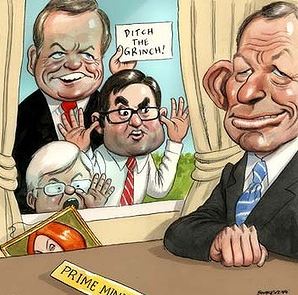 Email ThisBlogThis!Share to TwitterShare to FacebookShare to Pinterest
Labels: better to blame Kit Marlowe for this one


A LADY golfer, obviously much distressed, walked into the pro shop and cried, “I’ve been stung by a bee.”
“Where?” responded the pro.
“Between the first hole and the second,” she replied.
“Well then,” said the pro, “your stance is too wide.”

A dreadful bit of sexism to start the year, admittedly, but needed this morning to match dreadful bits of silliness in The Age, where the New Year resolution of all who produce Melbourne’s for-the-moment daily embarrassment must surely be to sustain the inanity until the bitter end. It is all over those broadsheet pages today, smug and thick as the writers under whose bylines it appears. There is Damien Murphy, for example, turning the blind eye to fact and history in his appraisal of the year 1984, which appears on the newspaper’s website apropos of nothing the casual reader can discern. Perhaps it makes more sense in the context of the printed page, but regardless of medium, this line would be foul in any display:

Ronald Reagan won a second term to complete his defeat of the so-called ''evil empire'' of the USSR.

Moral equivalence has long been the mother’s milk of the rudderless left, but is Murphy really of the opinion that 80 years of murder, mass starvation, oppression, corruption and debasement of human dignity are no more than examples of bad press? Apparently so.

Tony Abbott has been a terrible Opposition Leader, if you believe the government.

A wrecker. A thug. A misogynist and would-be destroyer of Whyalla. He frightens pensioners and horrifies infants. He exercises too much and doesn't read enough. No one can prove he doesn't kick puppies.

There is no denying Abbott's personal brand is what you might politely style ''robust''. But this narrative rather ignores the polls. Yes, Abbott's personal approval ratings are disastrous (voter disapproval of Abbott sits at 63 per cent, according to the last Nielsen poll of 2012), but the attitude of most Coalition MPs is a resounding ''So what?''

See, it is the “if you believe the government” that lets Maley off the hook. They are not her opinions, perish the thought! After cataloguing Abbott’s many deficiencies of character, she opines that he is merely “robust” in his executiuon of an Opposition leader's duties. Like Comrade Colleague Murphy, the sketch artist’s invitations to echo fashionable views with fashionable friends at fashionable dinner parties are in no danger of being withdrawn.

Daniel Flitton might not be so lucky. No doubt his heart is in the right place – somewhere between Northcote and Fitzroy, most likely – but in expressing the view that gender barriers should be rolled up like the covers and Australia’s First Eleven opened to participation by female players he has gone a gender bridge too far. No doubt he thinks the idea of absolute equality will meet with approval, but that only demonstrates how difficult it can be to stay on top of the latest memes.

A couple of years ago, he would have been just fine in suggesting that the nation has an adequate supply of block-shoulder bowlerettes and winsome willow wielders. But not now, not when the parameters of inclusion have been redrawn along lines that look very much like separatism. Ever hear of the Stella Prize? It is a new literary award reserved for the women who have not been featuring with sufficient prominence in the Miles Franklin short lists, at least by the reckoning of the HarpieCollins set. The fact that the statistics have been cherry-picked to make the case for a Shiela Prize need not enter into it.
Dan had better revise his opinions and quick, especially with regard to Fairfax’s very own and looming gender issue. By his reckoning, women have a right to compete on equal footing (albeit with legs somewhat closer than that bee-buzzed lady golfer who began this post), competence, rather than chromosomes, being his only yardstick.

So expect him, after due reflection, to be waiting with a posey at the front entrance of Media House, eager and bright-eyed to welcome Gina Rinehart as his new boss. If we are to go by reports that she is about to take charge, how could he object to a woman who has competed with, and beaten, the blokes?