Why hasn't this man been charged?

IN THE Silly today, former student Gareth Hutchens presents a glowing profile of "pre-eminent Australian economist Frank Stilwell", whose shaping of young minds has done much to make Australia what it is today:

Other students of his ripple through the media: Stephen Long, Eleanor Hall, Jessica Irvine, Michael Janda. Most of his students would recall his pointing out the success of those who once sat in the chairs they now occupied.


Jessica Irvine and Clive Hamilton, too!

UPDATE: That list of luminaries, it jogged a memory or memories being jogged. The last paragraphs of Good-bye., Mr Chips:

And then the chorus sang in his ears in final harmony, more grandly and sweetly than he had ever heard it before, and more comfortingly too. . . . Pettifer, Pollett, Porson, Potts, Pullman, Purvis, Pym-Wilson, Radlett, Rapson, Reade, Reaper, Reddy Primus . . . come round me now, all of you, for a last word and a joke. . . . Harper, Haslett, Hatfield, Hatherley . . . my last joke . . . did you hear it? Did it make you laugh? . . . Bone, Boston, Bovey, Bradford, Bradley, Bramhall-Anderson . . . wherever you are, whatever has happened, give me this moment with you . . . this last moment . . . my boys . . .

And soon Chips was asleep.

He seemed so peaceful that they did not disturb him to say good-night; but in the morning, as the School bell sounded for breakfast, Brookfield had the news. "Brookfield will never forget his lovableness," said Cartwright, in a speech to the School. Which was absurd, because all things are forgotten in the end. But Linford, at any rate, will remember and tell the tale: "I said good-bye to Chips the night before he died. . . ."

Posted by Bunyip at 3:34 PM No comments:

Oh, for the days when psychological disorders were borne largely of the mundane -- "It all started when my father refused to take me to the circus" and so forth.

Well things have certainly changed. At Daily Life, authoress Kasey Edwards hints at the roots of her own unique condition:

...as all my rational thoughts deserted me and my sexual anxieties rose to the surface, I understood why my mother never showed me her vagina.

Glass-top tables were widely available when Kasey was growing up, so there is no excuse. Is it too late for the authorities to charge Mater Edwards with neglect? Someone needs to be held accountable for the damage done.
Posted by Bunyip at 8:25 AM 16 comments:

Email ThisBlogThis!Share to TwitterShare to FacebookShare to Pinterest
Labels: kasey edwards, use of windex urged

A Suitable Case For Treatment


IS OUR Prime Minister bonkers?

One must never ridicule the touched, so be assured this question springs from the sincere concern that something has been misfiring behind those smart new glasses. The vulgar definition of madness is, of course, entirely subjective, one man’s stark-raving being another’s Christine Milne, so it can all get complicated and contentious very quickly. Like the Greens leader, roughly ten percent of the voting public believe fervently and fearfully that carbon goblins are the root of the world’s many ills, so practicality alone must broaden sanity’s definition. The world simply does not need that many new baskets, nor can the nation afford anywhere near enough calm, comforting institutions where Daily Life writers and the readers who love them can reach their full potential.

There are some behaviours, however, that embody mental illness beyond even a reverence for Bob Brown. In the PM’s case there are those chronic, incessant and transparent lies, which might strike some as the rattles of the odd loose screw. To other eyes, perfectly normal behaviour for a politician, and no reason whatsoever to suspect we have a loony in the Lodge. If she has failed as a fabulist, well hasn’t she failed at everything else to which she has turned those hands of thumbs?

See the problem? As this is a matter of national importance, expert opinion needed to be tapped. Fortunately, this was but a click or two away, thanks to the famous Mayo Clinic, where thefollowing boxes must be ticked before staff will break out the straightjacket and electric prod and wait by the entrance.


Let us take each in turn:

Marked change in personality, eating or sleeping patterns: Can anyone doubt the PM evidences galvanic mood swings? Nice as can be with her mummy blogger pals, even to picking up the bill, the next day she is slashing away at the paltry stipends of single mums.

An eating disorder? Well, unless Tim waits until she sleeps before stuffing her unconscious craw with one of those crank-and-tube devices the Belgians use to force feed ducks, we can assume the hand on the fridge door has been hers alone.

A good night’s sleep? Impossible, what with having to keep one eye open lest Tim slip from the arms of his Venus to email a demand for free tickets and a corporate box for the Phillip Island Penguin Parade.

Inability to cope with problems or daily activities: Any doubters on this one?

Strange or grandiose ideas: Getting naked with Craig Emerson, how strange is that?

And what of the convictions that she can tamper with the global thermostat, stop thousands of illegal immigrants by shipping 800 to Malaysia, or most unhinged of all, produce a surplus by the odd expedient of spending more money?

Excessive anxiety: What will Tim do next?

Prolonged depression or apathy: Perhaps not. Loss of appetite is often associated with this condition, and there has been no evidence of that.

Thinking or talking about suicide: She has the date for September 14, only last week beating off an attempted intervention by Simon Crean.

Substance abuse: This explains the frequent appearances of that gremlin, Misogynist Tony, the sinister sprite only she can see.

No doubt about that one.

Email ThisBlogThis!Share to TwitterShare to FacebookShare to Pinterest
Labels: all recommended, cold baths, electro shock, Gillard goes ga-ga, Prime Minister Meat Axe, restraints, the loony in the Lodge, up a tree with Tim

Illegal Immigration At The Tipping Point 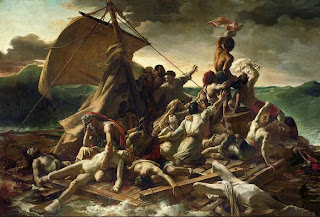 ONE of the former Mrs Bunyip’s deficiencies of character was an absolute inability to grasp the physics of floating objects. The wind would be on the beam, the boat heeling and going like the clappers and somehow, for reasons formerly attributed to suppressed memories of bath-time trauma, she would gravitate to the lee’s lowest corner. More than once, strong words, and sometimes a strong arm, were needed to get her up on the appropriate gunwale, where the merciful breeze often drowned the whine that stinky power boats with flash toilets are what civilised people get about on. Many times, late at night at the mooring, there was comfort in the thought that she was elsewhere and the Professor’s enthusiasm for splicing could be pursued without distraction.

Why an otherwise intelligent woman should have had this problem with water remained a mystery until this week, when the truth was suggested and, quite possibly, revealed entirely. Far from the undiluted Italian heritage she always claimed, it now seems a near certainty that the Moors and dusky types who visited Sicily and other bits at the boot’s southern end bequeathed a genetic predisposition to folly on the water. The Normans also passed through, of course, but their Viking heritage must have been obliterated by the dirt of the desert.

While still a theory, the capsize of the latest leaky boatload of illegal aliens off Christmas Island certainly suggests that waterborne idiocy is a distinctive trait of those from parts where the rigs are few and mostly lanteen. The details are sketchy and will remain so until the official inquiry, but one doesn’t need to stretch speculation too far to guess what happened: Having thrown away their passports, some half a million dollars’ worth of contraband human cargo spied the RAN’s approaching taxi service and dashed en masse to the hailing beam, probably port given the boat’s point of departure and intended destination. Simple physics asserted itself, the boat bottled, leaving many to splash about and adding two more bodies to our Prime Minister’s latest offerings on the altar of her wilful refusal to safeguard the nation’s borders.

It is a matter for some concern. The likes of Stuart Rintoul, refugee advocate and sexton of the watery graves his nostrums have helped to fill, are always saying that the immense effort to reach Australia is an indication that illegal aliens are get-up-goers who will do much for their adopted homeland. That the getting up and going is mostly to Centrelink appears to trouble him not at all.

But someone has to worry about the quality of our latest New Australians, for it seems they can do nothing right. Not only do they sink their wretched boats – accidentally or on purpose, the result is the same – they also seem incapable of topping themselves with anything approaching a reliable efficiency. It is a relatively simple matter to organise rope, chair and beam, but if press reports are any indication, aspiring residents of our Housing Commission towers prefer instead to guzzle detergent and Pine-O-Clean. Let us hope Draino is not made available, as suicide attempts might lead to accidental deaths.

John Howard was much maligned for suggesting that new arrivals should demonstrate a familiarity with Australian culture and history before being granted citizenship. A good suggestion so far as it went, it behooves us in light of recent events to expand the scope of questions beyond Donald Bradman’s batting average and the dimensions of our PM’s gusset. Some multiple-choicers about other notable figures -- water wally Harold Holt and point-blank marksman Adam Lindsay Gordon, for instance – would do much to assure newcomers that they already have something in common with those waiting to welcome them.
Posted by Bunyip at 10:54 AM 20 comments: