YOU have to feel sorry for the poor dears at Fairfax. There they are, adrift on their sinking ships, yet content enough in their own simple way at the thought that they have driven off all those nasty conservatives who used to buy their papers. At The Age, where not even one conservative columnist is allowed to sully the newly shrunk pages, the big effort appears to be invested in making sure bad news appears less so .... before being made to vanish altogether.

Take this morning's poll showing that Gillard's dills now enjoy the support of only 29% of the voting population. Fairfax paid for the poll, so you might imagine it would wish to give it much prominence. And so it did, for a while.

What follows is a frame-by-frame record of the incredible shrinking poll story:

At 9am we saw this on the Age homepage: 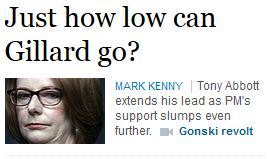 A bit after 10.30, the headline had been softened somewhat and pushed down the page:

And finally, at around lunchtime, Peter Hartcher weighed in with an analysis -- correct, as it happens -- that rather neatly deep-sixed the actual, shocking polls numbers:

There are some polls, however, that do get a prominent display, with no fudging of headlines or hack columnists' attempts to cushion the bad news with a dribble of interpretative insight. On the same home page where word of that dreadful poll was made to vanish, we also find this:

The Age will be dead soon, done in by its own left hand. It will be no great loss.

Email ThisBlogThis!Share to TwitterShare to FacebookShare to Pinterest
Labels: down the memory hole, if gillard crapped in the dispatch box the Age would hail her efforts on behalf of organic fertilisers, the age

On the subject of Muslims and Waleed Aly, who can spot "pervasive racism" even when it cannot be seen, what would the toast of Radio National make of this report in The Australian?

Aftab Malik, 37, said a "sense of uneasiness" existed in Muslim Australia that he recognised in British Muslims before the July 7, 2005, suicide bombings by Islamist terrorists that killed 52 people, prompting a dramatic reassessment of issues.

"Unfortunately, it took the 7/7 terror attacks for Brits to really consider the fact we have to go beyond issues of Halal meat and the length of one's beard," Mr Malik said.

The visiting member of the UN Alliance of Civilisations, a group formed by then UN secretary-general Kofi Annan in 2005 to "counter the forces that fuel polarisation and extremism", said Australia needed to have discussions "about culture, about meaning, about belonging".


Well that is one mullah's opinion. A more popular view -- outside Lakemba, at any rate -- might be that Australia needs to confront community leaders who drop broad hints of the bombings to come unless their followers are granted immediate "attention" to their issues.

And what might those issues be, the factors that might inspire home-grown Australian Muslims to ape the explosive protest of their British-born London counterparts? Nobody seems to know, and certainly nobody quoted in the Australian's report.

Mullah Malik is on his way back to England, that shining example of multicultural unity.

The pity is that he wasn't thrown out

Vacation home in Mecca? Not just yet


CHIN HAD not know razor for several weeks when the Stormy Petrel yesterday ended an extended period of aggrieved silence with an SMS. If the Professor happened to be placid, hungry and prepared to behave, then her friend, who is at home at the range, would find room at the table for an item of XY eye candy. They were not quite her words, but dewy sentiment rang clear. After a month of silence, foolish female pride had been abandoned and that little misunderstanding concerning the metallic-pastel Micra observed overnight in the Billabong’s driveway must have been forgotten. This was welcome news indeed, as it obviated the need to take another shot at a credible explanation for its owner lingering beyond breakfast.  The text message, which arrived mid-putt, seemed that most wonderful manifestation of modern feminism: a liberated and eager woman taking the initiative. Why modern gals grumble – many of them, anyway – about unwanted overtures is quite the mystery. What could be nicer than the direct proposition? It is flattering, efficient and obviates the cost in cash and carbon emissions of preliminary investment in several courses of multi-cultural munga and two seats at the Westgarth.

Hmmm, but those whiskers. Should they go or stay? A bit of stubble is quite the thing these days and has worked wonders for many. What other explanation can there be for Waleed Aly’s appeal to those who hire and fire at Fairfax and the ABC. It is quite clear the man has nothing else to recommend him, least of all coherent thought, so it must be the zyph that has turned so many influential heads. Either that, or Radio National is run by people keen to cite at their own dinner parties evidence of that wonderful, open-minded acceptance which regards a fellow who keeps his wife in a sack as not merely representing a more enlightened world but a better and fairer one. Why not make like Wally and present for dinner with bristles intact?

The beard won, in part, it must be admitted, because the golf club bar proved hard to leave and there simply wasn’t time upon stepping into the shower to have it off. Therein the folly of squeezing an extra vodka tonic, although the gravity of this indulgence would not become obvious until much later in the evening.

The food was lovely, as promised, and another guest’s two bottles of Argentinian malbec even tastier. We have, in Australia, many bodies devoted to redressing racism and lifting the burden of oppression from villifed minorities, so many, in fact, that Prime Minister Abbott will probably need more than three years (and a bit of a ginger from inside his own party) to dismantle them all. In the meantime, a clever strategy might be to shift the race bureaucrats' focus to advancing the equality of now-obscure ethnic varietals. The bureaucrats would keep their jobs, which would forestall any protests about racialist injustice, and they might indeed find the new brief a good deal more satisfying. Surely there is more appeal in sharing the spotlight with a good drop than admiring the Soul-Glo sheen of the latest trotted-out mullah's worshipful beard?

Now let us be clear that the Professor’s whiskers were nowhere near being in the same league as those of the tea-cosied cleric who several weeks ago laid out for Q&A’s audience the reason why there is no need to get upset about Islam’s hatred of homosexuals. He went on about it at some length, but the unspoken gist, judging by his fellow guests’ reaction and other of the programme’s questions, would appear to be that it is acceptable for Muslims to consign sodomites to eternal flame, sometimes with the aid of crane and rope in the public square, because, well, Muslims are not Catholics.

This post is not, however, about the equality of all cultures, but the caprice of female passion.

“Eewwww!” the Petrel exclaimed. “You look like an old derro.” Normally quite accepting of otherness -- indeed, eager to extol it -- her tolerance could not stretch to the non-religiously hirsute. There would be no happy bonding after that.

This morning the beard vanished scrape-by-scrape down the plughole, a painful reminder that cheap razors are no bargain. But little cuts and all, a reminder, too, that a bald chin is still better than the acceptance to be gained with Allah-sanctioned bristles.

In the fridge a handsome shoulder of pork, rubbed hard with salt and mustard, awaits tonight’s appointment with the barbecue. No, not for affection, and certainly not delectation, would it be worth joining the Prophet’s disciples, not even to persuade a progressive miss of her obligation to revere a handsome chin and jaw, and other bits beside, replete with manly growth.

Email ThisBlogThis!Share to TwitterShare to FacebookShare to Pinterest
Labels: love doomed by chin whiskers, manly beards, vixen and hair, where is the love

THE SILLY's Ben Cubby, a man who missed his true calling as a minor Simpson's character, seldom lets consistency stand in the way of his reporting, and never when pals of a greenish tinge want a little publicity. Today it is the Animal Liberation Society, which is about to present some sharp-eyed cocky with an opportunity to bring down a $14,000 drone.

"Let's say we find a sheep dying from fly strike, we can record the location on a GPS and notify the authorities," the ALS's Mark Pearson tells Cubby, who takes it all down without breaking the habit of a professional lifetime and applying a little independent curiosity.


A few paragraphs later, and still dutifully transcribing, Cubby reports one of the activities Pearson's drone will be looking to film:

"There are lots of cases where farming activities cause horrible distress to animals - mulesing being a common example."

Mulesing is, of course, a popular method of protecting against fly strike.

Posted by Bunyip at 1:17 PM No comments: