The Bird has flown

The Bunyipmobile has not been in the garage for 10 days or so, and it has been a lonely road paved with quite some regret. Some time ago, as visitors may recall, there came a parting of the ways with the Rufous Bird, who had been a fixture at the Billabong and was rather keen to see those extended visits become permanent. Being a fool, the Professor demurred, one thing led to another, and while there were odd dinners in the name of old times' sake and irregular drinks (for who needs a reason to get out the corkscrew?), the old passion was kept very much in back pocket and handbag. But it was there all the same, stymied by a very stupid Bunyip's wariness of launching into another live-in relationship that might -- but probably wouldn't have, in retrospect -- ended in the acrimony that saw the former Mrs Bunyip depart to her friendly family law practioner.

They say those who ignore history are condemned to repeat it, and that is certainly true. But what they should also  say is that not all histories are templates and that drawing iron-bound lessons from one unpleasant experience can be as fraught with folly as not drawing any lessons at all.

The other day an SMS arrived to announce that the Bird's new companion will be lugging her suitcase on an extended holiday, just the pair of them. The likelihood is that this jaunt will be a prelude to joint residency, so all half-formed plans to resurrect the union are now moot. Probably forever.

One of the things about blogging is the opportunity it presents to cast stones at others' idiocy. Were the topic love, this Bunyip's projectiles would not land beyond the front fence.

NOTE:  The above is this blog's 1000th post. Would that it have been a happier topic.

Email ThisBlogThis!Share to TwitterShare to FacebookShare to Pinterest
Labels: fool for denying love 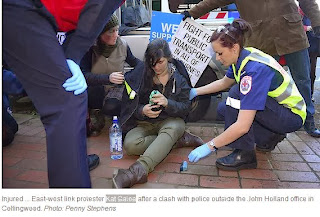 How easy is it to get a PhD from James Cook University these days?

Read this CV-builder, otherwise known as a dissertation. from Grace Smallwood, blacktivist and raving nut job.

Has James Cook introduced new sub-categories -- Doctor of Rants, for instance -- or is it simply that a black woman with a big mouth and a larger chip on her shoulder is as immune to critique as she is distant from logic and originality?

No doubt serious minds are to be found on the James Cook campus, even allowing for a heavy infestation of climate "scientists" and enviro grant gobblers. If  the academic clean skins don't wish their own reputations besmirched by association with Smallwood's spillage of deranged piffle, then this is the moment to raise a stink.

A good good place to start might be here or here.

Email ThisBlogThis!Share to TwitterShare to FacebookShare to Pinterest
Labels: get a PhD for your cat today, Grace Smallwood, James Cook University

Too poor to be entirely original

A former Silly journalist, who asked not to be quoted directly, writes that Julia Baird should re-consider her disdain for the rich, as they don't have to borrow quite as much as she.

Not that the Silly would deem today's column plagiarism, mind you. The bar was set pretty high when Ross Gittins was cleared after penning a column that boasted 90 per cent of other people's unattributed words, and Ms Baird has actually invested the effort to re-write and paraphrase.

First they came for the bikies....


Sometimes, when the social urge takes charge, the Professor sallies forth to break bread with like-minded types. Such dinner gatherings often represent a critical mass of antisocial attitudes, as judged by contemporary Victorian standards, there being much levity at the expense of hooked-up, nicely remunerated members of the Mordy-Litijus tribe, social workers, the notion that underpaid teachers spend their four months’ of holiday time preparing lesson plans and, inevitably, the sort of women who represent compelling arguments for male sodomy. Given what happened in Andrew Bolt v Self-Identifiers and the fact that cigarette butts are sometimes carelessly discarded beneath an al fresco table, a case could perhaps be made that a peaceful Bunyip and companions are law-breakers and undesirable elements liable to prosecution under a variety of new measures being introduced in the Garden State and other jurisdictions. In Victoria, the latest novelty is a ban on what are being described as domestic “fortifications”, which police have been given an authority to tear down. They are embracing that option with relish.

The new law is aimed specifically at bikies, as is Victoria Police’s stated intention to give anyone riding in club colours a hard time, even if they are within the speed limit and perhaps on the way to refurbish grandma’s spouting.  In other states similar measures have been introduced, the common thread being that Australia’s various police forces need something more muscular than  existing laws to make outlaw motorcyclists behave themselves. This seems a peculiar view, as dealing drugs, manufacturing them, stockpiling arsenals and shooting fellow citizens are already against the law and have been for some time.

Now it is true that bikies elicit little sympathy and deserve less. Certainly, no decent parent would be pleased to find a child had decorated himself with a “1%” tattoo. Plus, given the way that Harleys handle, there would be reason to doubt the young one’s sanity, as agile Italian and Japanese crotch rockets are cheaper, faster and a lot more fun. But being stupid and illuminating your bicep with a tatt are not illegal activities – not yet, anyway. What should worry the rule of law’s supporters is just where this business of nominating particular groups for selectively harsh treatment might end.

The Billabong just happens to be surrounded by a rather high and private fence, which by the new legislation’s loose definition might be construed as one of those "fortifications".  The possibility that police might come knocking is, while unlikely in the near term, a possibility down the road, for if there is a tendency amongst those who pass and enforce laws it is the lure of “mission creep”.

"Step away from the  Anne Summers jokes, put down the list of Arts Victoria grants recipients and throw yourself face-down in the dirt....." Fanciful, yes, but not unthinkable -- not in a land where a former ABC media critic is consumed with regret that the Finko and Ricketty review was unable to impose the threat of jail time on troublesome newspaper editors.

Today it is bikies on the short end of the battering ram. Tomorrow, who knows which sub-demographic of undesirables might be in for a bit of official attention?

Email ThisBlogThis!Share to TwitterShare to FacebookShare to Pinterest
Labels: how many more laws do you need, how many more villains will be identified

How Victoria's Education Department encourages Aboriginal students to master language, mathematics, chemistry and all the other subjects that save teachers from the ignominy of careers as social workers: 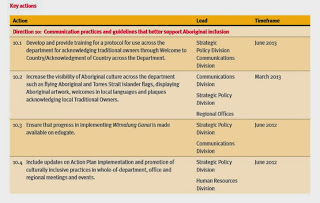 Click and the image will get bigger, as the Indigenous actress said to the Rainbow Serpent bishop.

And don't forget, no physics lesson is complete without a Welcome to Country ceremony, about which Education Victoria has formulated some helpful guidelines. Notice that the department's normal abhorrence of sexism and gender stereotyping has been suspended...

... but cash payments haven't been: 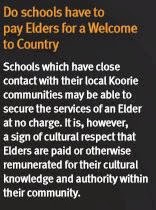 Email ThisBlogThis!Share to TwitterShare to FacebookShare to Pinterest
Labels: dark days for education, how much Secret Bureaucrat Business does it take to end the cringe-worthy patronising of Aboriginal kids

Several commenters on the post dealing with the Melbourne Writers' Festival and the $250,000+ it receives from the Victorian government have accused the Professor of bias in failing to mention that not every guest at this year's conclave was a grant-fed luvvie leftoid. "You are a lying @#$%," noted one aggrieved visitor, whose salty language precluded his thoughts being posted on what is a civilised blog. "Why don't you mention that Tory @#$% Boris Johnson or does he spoil your bull^&*( thesis?"

Boris was indeed on hand, and as he represents the sum total of the organisers' efforts to present someone other than owners of biodegradable bicycles and sustainable Lit Board grants, he most certainly should have been given a guernsey.

The full guest list can be found here, each participant's CV available via a handy link. As an exercise, see if you can find a conservative.