THERE is a picture that is said to be of Arthur Adrian Ernest Bayley, accused killer of Gillian Meagher, at Aussie Criminals. Pop across, have a dekko and then read this recent story in The Age.

Now take a look at the Identikit picture of the offender sought in that St Kilda incident. Here it is:

Legal niceties be buggered! The Bailey picture is already on the Web and all over Google Images, so here it is for an easy comparison: 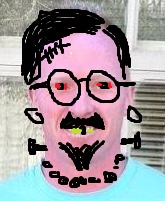 (Image altered: This will guarantee a fair trial)


And here is another interesting thing: In the Age story, the victim recalls how her attacker warned  that a bad man was following her and that she should get into his car, where the assault took place.

Now recall the bridal shop security video, especially those seconds after the man in the blue hoodie is seen approaching Ms Meagher and telling her something. What does she do next? Looks behind her, back the way she came.

ADVISORY: The storm that was supposed to obliterate Melbourne this afternoon has turned out to be a bit of a squib. The sun is even out -- yes, this is Melbourne -- and there is time for nine quick holes. Feel free to comment, but readers' observations will not be posted until much later. And thanks to the modest reader who pointed to the Age story and its Identikit picture

WEATHER UPDATE II: No sooner did club strike ball than the sky opened and the round was abandoned

and gratitude to Tom for noting that Bayley was re-christened Arthur. Blame that on an indecent rush to reach the first tee
Posted by Bunyip at 3:30 PM