There is something peculiar about the case of Sayed Abdel Latif, or Sayed Ahmed Abdellatif as he is known to Immigration Minister Brendan O’Connor and the Silly, very peculiar indeed. Given all the uterine distractions of the past week, some may have forgotten the illegal Egyptian migrant who was kept behind that “tennis court fence” in the Adelaide Hills, despite an Interpol alert listing him as a weird beard terrorist, murderer, explosives monger, forger and master of many other skills that admirers of the seventh century put to such frequent use. 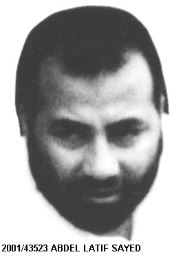 Do not stand near this man if your hear him ticking

Then, all of sudden and just as his case began to generate much heat in Australia, the Interpol “red notice” was amended and the Gillardians were pointing fingers across the chamber and accusing their opponents of intolerance for otherness. Now O’Connor has taken it a step further. According to the Silly, theMinister for Sinkers and Floaters,

…has contradicted the Australian Federal Police over the reliability of Interpol red notices after the embarrassing collapse of terrorism claims against asylum seeker Sayed Ahmed Abdellatif.

Speaking to Fairfax Media's Breaking Politics program on Monday, Mr O'Connor said Interpol red notices were often wrong - an effective swipe at the AFP, which had cited a red notice in declaring that Mr Abdellatif had been convicted of serious terrorism charges including murder and explosives possession.

Mr O'Connor said Labor had been warning all along against "rushing to judgment" about Mr Abdellatif, an Egyptian asylum seeker who sparked a political storm last month after it emerged he had been kept in low-security detention despite the Interpol red notice.

"There are many, many states that are signed up to Interpol and they've made many errors in the past," he said."The Australian Federal Police takes them very seriously but knows it must examine the veracity or otherwise of those claims because quite often claims, even against Australian citizens who've had red notices out against them, have been found to be wrong."

Politicians, please note: If you are going to lie, do so to a Fairfax reporter (allowing that an ABC jotter is not handy) because they simply repeat whatever you tell them, no matter how transparently ridiculous. The minister says the Latif affair was a misunderstanding and the charges all wrong.


Well, not really. Interpol explains what happened in this statement, the key part of which is this:


….a Red Notice for Mr Abdel Latif was issued by INTERPOL's General Secretariat on 1 October 2001 for a variety of offences, including premeditated murder.

As required by INTERPOL’s rules on maintaining information in its databases, on 29 January 2007 and again on 24 October 2011, INTERPOL’s NCB Cairo requested that the Red Notice for Mr Abdel Latif remain valid and active for the same charges as originally requested.

Therefore, any law enforcement authority consulting INTERPOL'S databases between 1 October 2001 and 13 June 2013 would have read and believed that Mr Abdel  Latif was wanted for arrest by Egyptian authorities for a variety of terrorist-related offences, including premeditated murder.

O’Connor can hardly blame the AFP for observing protocol. More curious is why, after twice endorsing Latif’s presence on the red-alert list, the Egyptians just happened to decide he was a less nasty chap than originally thought. How fortunate that they reached this conclusion at the precise moment his presence in Australia was causing the government a good deal of distress and embarrassment.

It would be interesting to see O’Connor called to the dispatch box to answer this question:

Did the Australian government approach the Egyptian government and quietly ask that the alert requesting Latif’s apprehension be amended and charges dropped?

As a supplementary, this query might also be put:

Even allowing that Latif is not a bomb-building murderer, is the Minister happy to have in the country a man Interpol still names as a forger working for a terrorist group?

Fairfax could have put these same questions but neglected to do so. Somebody certainly needs to.