ONE of a career in Etruscan semiotics’ great attractions was also the easiest to grasp:  you could make it all up as you went along. Well, not make it up exactly, because there were already a few, a very few, pioneers when the Professor charged like a bull into the field some decades back. Citing their scholarship kept them flattered and happy and, once deference had been demonstrated and fealty proclaimed, the door swung open on wonderland of academic ingenuity.
Say, for example, the department needed a little assist from the sods and saphies at Queer Studies, always being aware that it is very important to have allies when budgets are being thrashed. No worries, very easy to arrange. Add to the PowerPoint an ancient fresco of, say, Chiron doing some naked mentoring with an adolescent Achilles and present “the image” – there is no such thing as a mere illustration these days -- as proof that any lingering disdain for pederasty defies history’s precedent and is solely the legacy of joyless Victorian repression. 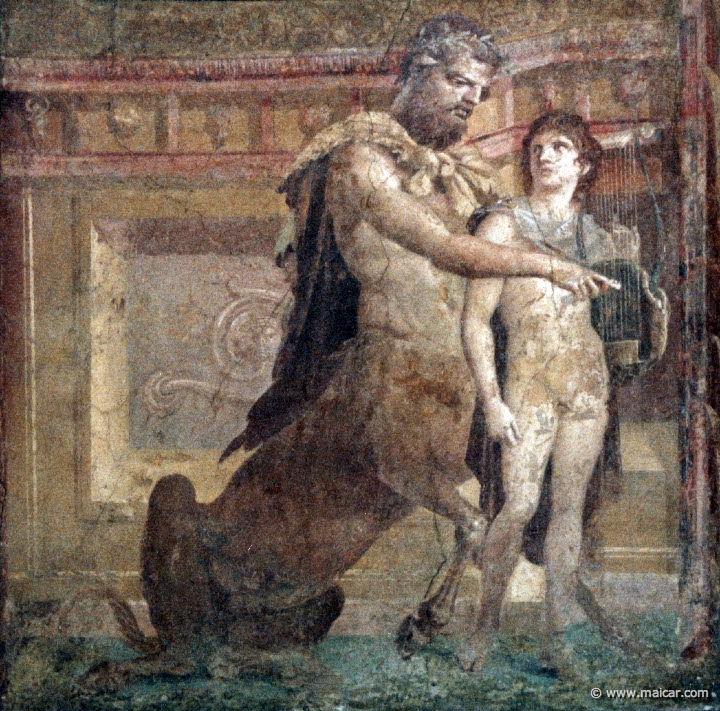 Note next that intolerance is the curse from which society must free itself, that discrimination is vile, that there must be “societal growth and evolution”, not to mention “confrontational honesty”, and make frequent use of the always popular “need for the appropriate response”.  For the money shot, suggest all present put their names to a public letter protesting restrictions on older gents who loiter near school groups at the municipal baths. By this stage, someone at the table will have surely announced the intention to pen a Phage opinion piece along the lines of “Priestly Abusers Demean Man/Boy Love”. Another voice will note that Tony Abbott is a Catholic and all present can then enjoy a little chuckle about his six-pack, Speedos and hypocrisy. Then it will be on to the agenda’s less weighty items.
With fresh dollars in the departmental pocket it is good to give the impression of diving straight back into the work at hand, which mostly means fostering the next crop of PhDs who, upon graduation, will hail their old professor’s magisterial corpus as they peer-review each other’s output. Thus does the circle of academic life renew itself – and a good thing, too, both for members of Australia’s intellectual elite and the financial institutions holding their mortgages.
None of the above is anything that would have been admitted back in the day when there were papers to be graded and hungry post-grads to do all the marking. That reticence once seemed appropriate, even ethical. Now things have changed -- thanks to that Hungry Beast rap video, which has revealed how other areas of academic inquiry follow very much the same methods that built the budget and profile of Sydney Orr’s Faculty of Etruscan Semiotics. All thanks for the eye-opener go to Melbourne University’s Ailie Gallant (below), one of those hockey-sticking hos from the science ghetto whose rapping and cursing demonstrated why climatologists command the respect they do. Ailie is quite proud of that video, by the way, and has even added mention of the performance to the “Media and Outreach” section of her bio page in the Parkville Asylum’s staff directory.

It is not Allie’s efforts to attract attention  (which can also help with the funding), but her co-authored paper on water flows in the Murray Darling Basin which has brought so much re-assurance. In particular, it is the remarkably specific conclusion that there is precisely, and she is very exact about this, a 2.3% likelihood tht any of the many droughts over the past 1500 years were worse than the one just ended – the same dry spell during which the she began smokin’ dos’  stats in her climate crib. It was a popular meme a few years ago, back when rain refused to fall and climate change was replacing global warming, so her enthusiasm at the time was understandable.
And her methods? Well, let’s just say that the Professor is -- yo, lab bitches -- down with them.
The Original Custodians were not big on meteorological records, so that was a problem for Allie right there. She might have gone off to Barmah (a lovely spot) and cored a few red gums or somesuch, measured their transected rings and deduced when it had been hot and dry or cool and wet. That was not her preferred method, however. Rather, nice and comfy at a Parkville work station, she consulted those who went before, mining their studies of celery top pines in Tasmania, teak in Indonesia, some tall timber in Western Australia, Tongan corals, kauri in New Zealand and other interesting bits of Bali, Fiji and the Great Barrier Reef. The closest survey site was a good 900 kilometres from the Murray, the furthest a 10-hour flight, even for Tim Flannery. Data sources so far removed from the river she intended to study might have suggested an insurmountable obstacle to those who know not the miracles of modern modelling. By reviewing numbers here, sifting charts there and rejecting discordant figures in accordance with recognised climatological norms and norming, Ailie was able to feed what was left into a computerized vitamizer and – golly gosh, guess what? – demonstrate with charts and graphs that the recent drought really was the worst in centuries, just as the Phage, ABC, Guardian, World Wildlife Fund had been saying all along!
Indeed, by Ailie’s reckoning, it was even worse, which must have convulsed the WWF’s fund-raisers with shivers of delight: the drought was not the nastiest in 100 years or even 1,000 years – it was a full 1500 years since Australia had seen the arid like. Just to put things in perspective, that is not too long after the Romans pulled out of Britain. Amazing, ain’t it, what climate science can learn about a river in southern Australia from a bit of Bali coral someone else has studied? And don't getting suspicious, thinking nobody could be that precise on the basis of such much-handled data.The science is settled, Ailie assures us, and to a 97.7% certainty, no less!
And that, as Ailie rapped the other night, is what climate science is all about. She is proud of her research, naturally, and quite probably eager to tackle the next challenge -- pinpointing Warrnambool’s worst hailstorm since the Council of Trent, perhaps. As for the Professor, there are no regrets at the Billabong. Climate science might be better funded, but the case for pederasty was, while almost as open to question, much easier to make. And, as any self-respecting climate denier would add, much more convincing.
Posted by Bunyip at 7:50 PM