One morning some decades ago, after a night of depraved and invasive passion, it seems an architect squatted atop a mirror, sketched the gross damage inflicted on a ravaged sphincter, added some walkways and the odd human figure, and then hobbled up to Spring Street, where he sold the then-government of Victoria on the peculiar notion that the image represented a blueprint for a fine, new public building. No doubt he described it as “daring” and “world class”, which would have gone over very well with those in charge of the public cheque book. Nothing brings more comfort to the terminally insecure and provincial than the notion that, elsewhere on the planet, fellow members of BOPAW -- the Brotherhood of Pseuds and Wankers – are inflicting gross ugliness on public spaces.  The end result of this peculiar process was Federation Square (below), which continues to squat at the corner of Flinders and Swanston streets, a jagged and indescribably foul advertisement for the ongoing need to borrow some of those large tip-trucks from Gina Rinehart and load them with a Manhattan Project’s worth of haemorrhoid crème. 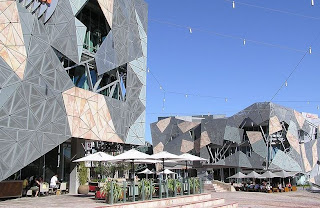 Directly across the road from Federation Square is Flinders Street Station which has undergone a number of minor renovations over the last 40 years. Those caught short will know the public toilets, once classic examples of Victorian defecatoriums, are now reeking, stinking, crap-fouled case studies in low-cost plumbing and plastic panelling. The Delft-style blue-on-white wall tiles advising exiting patrons, “Gentlemen adjust your dress” are gone, as are those on the ramps to the platforms, where once commuters were warned, “Do not spit.” Perhaps multiculturalism was to blame for the latter excision; it is, after all, a short walk from Little Bourke Street, where hocking a gaubie or ten is the accepted way to rid the palate of lychee fragments and express one’s appreciation after a satisfying meal. As thick-tongued Greeks and other newly arrived non-English speakers no longer get to announce the departure of trains to Upwey and other locales, the vanished warnings against hanging phlegm off the walls must assure recent arrivals to today’s Australia that diversity is accepted in all its many forms and mucous-rich manifestations.

Still, despite the modern tinkering, Flinders Street remains a handsome and practical example of the Victorian Era’s expansive confidence. A recent guest at the Billabong, a lady visiting from the United States, rated it her favourite Melbourne building and observed in passing that its solid, sober exterior indicts Federation Square’s sprawling eyesore. Alas, unless Melbournians act quickly and with resolve, she may have spoken too soon. Once again, and for no good reason, BOPAW’s agents are planning a massive fix to a building that doesn’t need fixing. 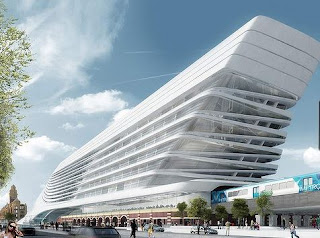 The visions for the new Flinders Street are detailed in today’s Age, where the editor’s sole claim to competence is having once produced a paper in New Zealand on the morning after a large earthquake. We can all expect The Age to support this latest attempt to deface Melbourne because, well, it will be expensive, ugly, pointless and a fine opportunity for journalists and editors at Fairfax’s southern outpost to pause by the bicycle rack and tell each other how much they appreciate the transgressive. Then they will go home to ponder whether it is better to remain for the moment at The Age in hope of a severance cheque, or to beat the rush and get their CVs in early at the ABC.

Victoria has a relatively new Premier, Denis Napthine, who has a greater understanding of his state and its people than his predecessor and recently has been rewarded with more cheerful poll results. Sooner or later, this latest BOPAW project will land on his desk. He needs to be told now, and quite firmly, that it is his duty to roll the artists’ conceptions into a stout, tight tube and stick ’em right up the remodelling advocates’ collective postern gate.

The Premier can be contacted here: premier@dpc.vic.gov.au

Urge him to fix up Flinders Street’s existing ballrooms and other features, and perhaps do some remodelling inside the existing building. But he must never, ever allow anyone, no matter how black-clad they might be or at pains to avoid sitting down, to tamper with the exterior.

Melbourne has endured more than enough damage at the hands of trendies and tossers. Flinders Street Station is where we must draw the line.

Email ThisBlogThis!Share to TwitterShare to FacebookShare to Pinterest
Labels: barbarians at the gates and beneath the clocks, flinders street station, from the folks who brought you federation square