Hon. Members without members (or portfolios)

If Bunyips had not been excluded from the 1967 referendum, it is entirely possible the Professor might have pursued a career in politics. As it stands, we remain second-class specimens, spurned along with all our nation's uterus owners and unwelcome even to knock upon the bolted door of Abbott's cabinet room.

Things would so different if Bunyip PM had taken up residence in the Lodge's fish pond.  Indeed, there would be no shortage of Pulchritude With Portfolio, with cabinet meetings very closely resembling the scene below. 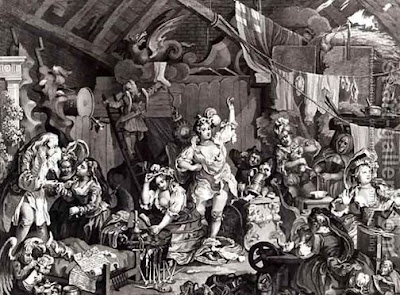 Alas, the vision of the great William Hogarth, who was a Pom but also quite clearly a Bunyip, has yet to be realised.


(Hogarth admirers will not need to be told the print is "Strolling Actresses Dressing in a Barn".)
Posted by Bunyip at 8:13 AM

Email ThisBlogThis!Share to TwitterShare to FacebookShare to Pinterest
Labels: Emma Alberici in the role of Parliamentary Secretary for Lycra, Grace Collier as Party Whip, Jennifer Hawkins as Minister for Low Moans, the perfect additions to any cabinet