If Gina Rinehart ever extracts the digit and actually takes charge of Fairfax her very first initiative as a proprietor should be to fire all those responsible for the Silly and Phage opinion pages -- not because they are irredeemably polluted with green-left groupthink, which they are, but because  none of those quality journalists seems capable of looking beyond the nearest academic enclave when recruiting contributors. The first casualty of this fixation is wit, of which there is precious little in either newspaper, and the second is the elevation of ideology gussied up as rational thought. These deficiencies seem never to be noticed by Fairfax editors, who one guesses bear a striking resemblance to those rows of open-mouthed clowns in carnival sideshows. You know the sort, forever swivelling side-to-side, always in sync with their similarly oscillating colleagues. 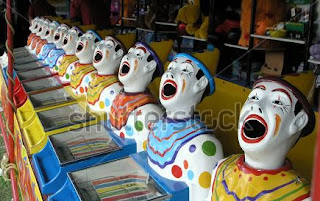 The Age's chief gobbler of thoughts more empty than any ping pong ball has today tapped the Parkville Asylum's Brendan Gleeson, professor of urban policy studies and director of the Melbourne Sustainable Society Institute, who thinks it is a terrible idea to build a tunnel connecting the Eastern and Westgate freeways. As you might imagine, anyone who heads an institute with the word "sustainable" in its title would say that, in this instance wrapping his personal disdain for cars and the freedom they confer in the garments of, ahem, economic analysis, purported polling and professorial insight.

What Gleeson doesn't mention, nor did the editor who published his thoughts, is that bottom-line considerations he cites are but waving branches above the rather less apparent tap root of his objections. You will need to survey his output to see where he is coming from, and it is most certainly not Doncaster en route by private vehicle to Werribee, otherwise he would be promoting the tunnel for all his ARC grants and sinecures are worth (a very pretty penny, that).

The thing to understand about Gleeson is that when cars go whizzing by his Malvern Star he thinks not of others' convenience but of class struggle and injustice. Indeed, amongst his grant-funded scribblings, concern for "the disadvantaged" and their alleged lack of personal mobility features prominently:

Unless you are a Fairfax editorial page director, you will get the picture: If we are to have a just and more equitable society, better-off citizens must be forced to get around on bicycles and public transport, which Gaia wants with all heart:


...the east-west link scorns the urgent need to decarbonise our cities in the face of a species emergency, global warming. Other cities and nations will judge us severely for building this smog factory in a time of planetary crisis.

Come on, Gina, stop buggarising around. If you're not going to take full charge of Fairfax, then dump your holding. Even a minority interest in this stupid, stupid company demeans your good name and reputation.

Email ThisBlogThis!Share to TwitterShare to FacebookShare to Pinterest
Labels: brendan gleeson, fairfax, from long march through the institutions to the obligatory pedal