The Gospel According to Kevin

On Q&A last night, Kevin Rudd explained his conversion to the gay marriage cause as no violation of scripture, alluding to St Paul's alleged endorsement of slavery and from there leaping somehow to the conclusion that those who oppose "marriage equality" would have been morally obliged to take up arms for the Confederacy.

What this tells us is that there is nothing this wretched facsimile of a man will not twist or misrepresent to advance his cause, which we knew, and that he has not lately read his Old Testament, especially Deuteronomy 23:15-16:

15 Thou shalt not deliver unto his master the servant which is escaped from his master unto thee.


16 He shall dwell with thee, even among you, in that place which he shall choose in one of thy gates, where it liketh him best: thou shalt not oppress him.


As to Saint Paul, who cops quite enough grief already from feminists, Rudd was thinking of the Apostle's letter to Philemon, which does indeed record the returning of a slave to his master. Yet contrary to Rudd's assertion, it is also quite clear that Paul, who was in prison at the time, has come to accept and endorse same-sex action. He makes that very clear in verse 7:


For we have great joy and consolation in thy love, because the bowels of the saints are refreshed by thee, brother. 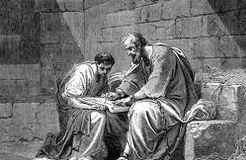 Paul and the runaway follow Tom of Finland's latest adventures

All scriptural knee-slappers aside, if Rudd had not been intent on misrepresenting Paul he would have been obliged to explain that, while honouring the law, the Apostle also dropped a very broad hint that manumission would be a fine thing indeed.

But that wouldn't have been Rudd's style. Why tell the truth when a lie will do?

Email ThisBlogThis!Share to TwitterShare to FacebookShare to Pinterest
Labels: deuteronomy, saint paul, The Apocrypha of the Blessed Kevin, we can be certain he's not Jewish