Frederick McCubbin is best known for his Pioneer triptych, which wouldn’t be acceptable today, not at all. There are no slaughtered Aborigines strewn about the canvas’ periphery and it is quite clear by the third panel that trees have been murdered in the name of mankind’s hegemonic oppression of all things natural and ferny. If Fred were to try and bag a  grant for such an obscene work these days he would pretty soon get a very solid education in what the taxpayers’ representatives demand for someone else’s dollar, and it sure ain’t his sort of stuff – not even in Victoria, where an allegedly conservative government sometimes makes squeaky noises about fiscal rectitude. 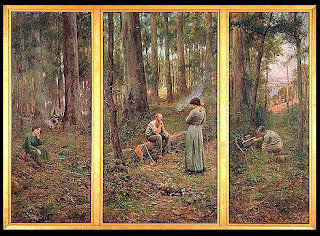 Instead, from Arts Victoria, we get a long list of things a Liberal government is happy to support, one recipient leaping from the ledger being noted communist Jeff Sparrow, whose little-read but much-funded Overland quarterly has just picked up another $50,000, presumably for its courage in publishing insights like Rowan Cahill’s rumination on the militarism at the heart of the Australian soul. Yes, militarism, as in jackboots and overseas jaunts to slaughter Japanese, Germans, North Koreans and many other varieties of the despised Other. Sometimes Guy Rundle also pens a little thought for Overland, so at least it can be said of Cahill that he is coherent, relatively speaking, and not at all out of step with Sparrow, who has been clambering about on the barricades since Labor’s defeat, breast bared and the flag of revolution in his worker’s hand.


Culture wars work the same fashion, except the gun the Left possesses is the possibility for mass action. We can save the climate only if we turn the environment into an issue in which everyday Australian feel they have a stake. That’s the escalation we need – and if we can manage it, the culture war rhetoric will become risible

Fellow Victorians, isn’t it re-assuring to have a Coalition government that knows what it stands for? In this case raising $50,000 in speed-camera fines and giving the lot to Sparrow of the Proletariat.

Footnote: Sparrow’s contributions to the sum of human knowledge also command respect at the federal level, as does his magazine, most recently to the tune of $183,000 (plus another $15,000 for a state of the art website).
Posted by Bunyip at 7:01 PM

Email ThisBlogThis!Share to TwitterShare to FacebookShare to Pinterest
Labels: jeff sparrow, lots and lots of little people's money for a conservative government's to give its enemies, overland