MEMBERS OF the Mordy-Litijus tribe endure another day's oppression in Canberra. Unaccustomed to whitefella ways, this court-recognised victim of injustice (above) nevertheless stands tall in his traditional studded denim jacket. Notice the totemic tatoo on his bicep, an indication he has reached manhood and is a full member of the Northcote clan. A darker-skinned protester has cannily disguised himself as a policeman. Meanwhile, a real Aborigine takes pictures as another displays his ceremonial backpack and white shirt, the latter a reminder that he must accept only preferment, not poisoned flour.

Traditional symbols stress links with the past. This design evokes the annual Moomba ritual, sacred to the Melbourne mob. 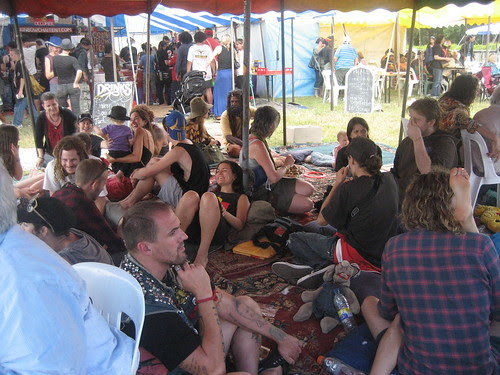 Aborigines from all tribes socialise in a traditional shelter known as "a mar-quee". Fearful that Tony Abbott will complete the genocide his ancestors began, the couple in the lower right appear intent on producing another generation before it is too late. Look closely and you will see the native maiden's leg has been placed over the young warrior's shoulder, a universally recognised indication of imminent availability. Pat Eatock, who taught Andrew Bolt a thing or two, displays a tribal fetish. It is revered as the footwear of a large, emu-like creature some still believe has the power to make everything turn to gold. This belief is fading, and much contemporary research has established the opposite to be the case.

On the sole and hidden from the camera is an enigmatic marking, "Town Mode" -- an incantation that is said to drive away journalists. There is a considerable body of evidence to suggest the spell works.
Posted by Bunyip at 11:48 PM

Email ThisBlogThis!Share to TwitterShare to FacebookShare to Pinterest
Labels: who knew being oppressed was so much fun?