She Rhymes With Itch

WHAT was it the American humourist Will Rogers used to say? Ah yes, "I only know what I read in the papers". These days, of course, we can learn a lot about newspapers by reading blogs -- and if you happen upon Margaret Simons' online handiwork at the Parkville Asylum's Centre For Advanced Journalism, where she writes about papers and other newsy things, you can also learn a lot about her. Going by this recent post, and ignoring entirely her recent kak-handed bid to put legs on baseless rumour, the first and most enduring conclusion will be that she is an extraordinarily rude piece of work.

But perhaps the Professor is being too harsh. Come to your own conclusions after considering the facts, which are these:

Simons' centre has taken under its wing a number of Sudanese migrants with an interest in journalism or, to be accurate, an interest in making sure journalists write only positive things about their community. To this end, one of Simons' acolytes contacted the Herald Sun and asked if it would be possible to arrange a tour for herself, former centre head Michael Gawenda, and a small posse of Sudanese youngsters. 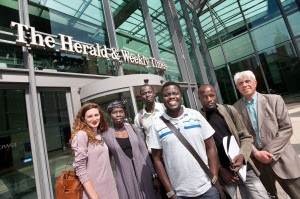 The newspaper agreed and appears to have assigned a very senior executive, Hugh Jones, to serve as a tour guide. He spent several hours with the group, answered their questions and even showed them Andrew Bolt's empty office. The result was a marked change in attitude in at least one of the visitors.

"We were ambivalent about what was ahead of us in regards to who we would meet and how we would be received," admitted David Vincent, who went home on the tram home a changed man. "I concluded Herald Sun reporters all just wanted to do their work with no intention of causing anyone or any group of people any harm. One man changed my views."

So far, so good. All the talk we hear so often about reconciling differences, gaining understanding of the other, burying hatchets, respectful co-existence etc., well all of that actually came to pass.  Hugh Jones, who must have had better things to do, invested his time, courtesy and effort and, after that, it was all ebony and ivory on Southbank. A coup for the Centre For Advanced Journalism!

But is Simons pleased about this development? Is she grateful to Jones? Does she see any good as having come from the visit? Not if the headline she has written for the official account of the trip is any indication. Here it is:


Just One Question: Why? Sudanese Tour the Herald Sun
Simons must have preened at the keyboard as she tapped out that little exercise in bitchiness. How witty! How cutting! How very sharp she must have thought herself!

And stupid too. Why were your students there, Ms Simons? Because they asked to be, you sneering gargoyle on an ivory tower!

If you ever wonder why some Sudanese believe themselves to be victims of newspaper bias and distortion, it may just be because ideologues in academic gowns do a roaring business these days in peddling and promoting paranoia. When those fears are put to rest, as they were by the Herald Sun visit, the venom still needs to seep out somewhere, in this case via Simons' headline. If this solon of quality journalism ever comes to your home for dinner, except a curt 'thank you' at the door and a blackguarding from behind her keyboard.

There is further evidence of this mindset in a note on the visit compiled by one Simons' disciples, a white American called Violeta Politoff. She writes:

When we arrived we walked into the foyer and I immediately noticed what I assumed to be a Herald Sun front page wall of fame. I was surprised to see that amongst these revered front pages was an image of Osama Bin Laden announcing his death with the headline “Got Him”. Such brashness made me question how issues around the reporting of Sudanese Australians could be addressed? Would any of us feel brave enough to ask these questions?

An image of Osama announcing his own death, eh? Well that would be a first, and don't forget the author professes to be some sort of journalism teacher -- a trade which appears no longer to require  familiarity with the most basic conventions of sentence construction. But that is a minor point, and it is not as if she is alone in her ignorance.

How could anyone but a lunatic take the Bin Laden front page as a statement of animosity toward a group of well dressed, well behaved students? What can Violeta Pull-It-Off believe goes on inside the Herald Sun to pen something quite so daft as that? Hugh Jones should have told her that Andrew Bolt's office was the scene of satanic rituals, with the Dutchman dressed as George W. Bush and Terry McCrann sacrificing little black Muslim babies on an altar cloth of Rupert Murdoch's underpants. The ridiculous creature would have believed every word.

Remember, parents, these are the people you are paying in the hope your children will emerge from their care with degrees and some prospect of a job. Just don't expect them to find work in any field where basic good manners are expected.

Simons should apologise, especially to the Herald Sun's Jones. And if she baulks, someone should make her.
Posted by Bunyip at 2:33 AM

Email ThisBlogThis!Share to TwitterShare to FacebookShare to Pinterest
Labels: herald sun, margaret simons' latest misadventure, of course he's a fellow at the Parkville Asylum, quality journalism as she is taught, she probably farts in lifts as well