THE WORLD slides a little further down the road to hell every single day, the latest milepost passed just yesterday when Fairfax brought joy to luvvies by releasing the latest Leunig calendar -- only to break their little hearts by demanding $2 per copy. In the past, Leunig's annual extrusions were provided free with the Saturday Age, Fairfax evidently seeing itself as much like the missionaries of old, who distributed uplifting tracts to benighted natives in the hope of changing their sinful ways.

There is no evidence this policy materially changed behaviours in Melbourne or Sydney, except at Fairfax itself, where the company took the cartoonist's advice and entrusted its affairs to a succession of wood ducks, hence FXJ's stock price, dire prospects and, most shocking of all, the need to charge $2 for something sensible people understand to have no worth whatsoever.

But luvvies don't think that way, not at all all. They know to their very bones that good stuff should always be paid for by someone else. So, to calm the panic, here is the free version of the Leunig calendar with all the standards elements, from a nice teapot to the laddered moon and, need it be said?, superb draftsmanship. And of course there is the essential Leunig message, fit to grace any pedal-powered refrigerator in what demographers know as the Fairfax Triangle -- the area bounded by Kensington, Collingwood and St Kilda where common sense and corporate profits vanish without a trace. 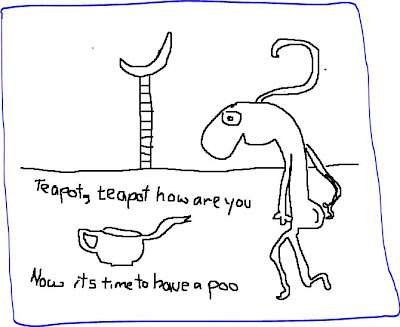 Just run off 12 copies, staple them and stick the wad to your Kelvinator. Nobody will ever tell the difference.

ADVISORY: Off to the golf club. No comments posted nor further posts until later in the day.

Email ThisBlogThis!Share to TwitterShare to FacebookShare to Pinterest
Labels: anyone can be a cartoonist, free and worth every penny, leunig