That "Parched" Stuff? It's Water

THAT Fairfax reporters are incompetent when not actively biased has been known and widely recognised for some time, especially by those who no longer buy or read the Silly and Phage. A young and naive lawyer shacks up with a crook, helps him via a concocted power attorney to conceal a significant property investment from his abandoned wife, and then gets fired when her malfeasance comes to light. To most, that would represent a prima facie case that the crook had been hanging his trousers on the bedpost of an arrogant and devious slut, but by the reckoning of Michelle, Lenore, Katharine, Phillip and all the other Fairfax girls it is glowing evidence of a strong, confident and admirably independent modern woman.

Perception is , of course, an entirely subjective thing, and sympathy must come easy to reporters who long ago sold their own honour for the privelege of parroting press releases and talking points from those whose approval and warm regards they value more highly than truth. So perhaps, on that score alone, the refusal by all but Mark Baker to take a closer look at the crook in The Lodge can by explained, if not endorsed.

But what about those moments when there is absolutely no room to grant the benefit of the doubt,  when those papers prove so blind to impartial reason that the visual evidence they provide directly contradicts the assertions of their own words? Here is a recent example (emphasis added at the Billabong):

WHEN is logging not logging? When it is ''ecological thinning'' in national parks, according to the governments of New South Wales and Victoria.

The two states are conducting trials in national parks on both sides of the Murray River. Under the project, trees will be cut down at 22 sites over about 400 hectares of the Barmah National Park in Victoria and the Murray Valley National Park in NSW. Most of the timber will be burnt as firewood.

The study will examine whether felling smaller trees gives more established trees a better chance of surviving in the parched environment.


Parched environment, eh? Here's the picture that appears just  a centimetre or so above that description. 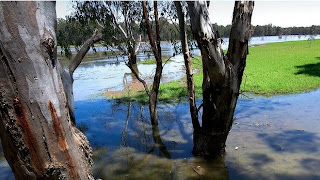 It isn't just moral and political corruption that is laying Fairfax low. It's that the company has elevated blind stupidity to a prime virtue.

A NOTE: Anyone genuinely interested in the health of the Murray, particularly around Barmah (where the Professor once hooked a Murray Cod so large it could not have been landed without the assistance of a Land Rover's PTO winch), needs to read this. It will explain why those red gums need thinning, why the myth of their timeless presence is so oft and loudly repeated, and why Fairfax's green legion of environment writers should never, ever be believed, slack and lazy bastards that they are.)