IT WILL never hang there, but it is still nice to imagine how this Charles Blackman would look over the mantelpiece. 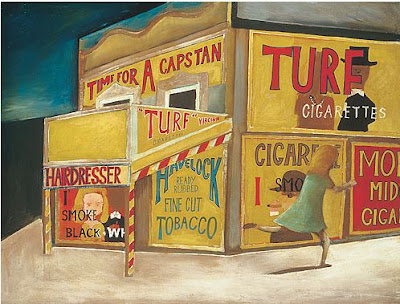 Not so nice to consider are the potential complications posed by restrictions on tobacco advertising should this painting ever come onto the market. It would be a stretch, but there does seem room for an officious bureaucrat to invoke what the Health Depart summarises thus:


An individual may publish a tobacco advertisement if it is not in the course of the manufacture, distribution or sale of tobacco products. The individual must have published on his or her own initiative and received no benefit in doing so – s.20. This exemption only applies to individuals and not corporations.

So, if you were to put that picture up for auction and turn a profit in the process, would your gain be safe from Big Nanny's grasping hand? She is serious, you know. While the sanction above has been in force since 2007, Nits Roxon has muscled-up the campaign to further limit free speech and property rights. From the legislation of which she is so proud:

And why might government agents be turning your shop upside down? Well it could be for something as trivial as selling, say, a packet of imported Silk Cut or Luckies without having re-packaged them in an officially approved Roxon box. Bad luck if your nicotine weakness favours one of those exotic brands.

You will just have to switch before Nits sends the heavies around.

Email ThisBlogThis!Share to TwitterShare to FacebookShare to Pinterest
Labels: nicola roxon, no Disque Blue for Monsieur Tourist, she's doing it for your own good, tobacco packing