The Silly Moaning Herald's chief Saturday story -- the most important news in all the nation if placement and prominence on the home page are a guide: 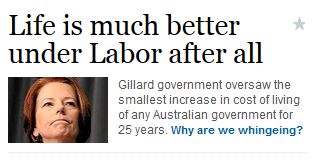 That little blue line at the end of the blurb goes to a fierce defence by Tom Allard of Labor's economic management, in which he expends many words alerting readers that they have never had it so good. Clear on that, men and women of Australia? So don't you bloody well grumble anymore about $1.52-per-litre petrol, which is what The Professor forked out yesterday to feed the Bunyipmobile. And those electricity bills? Well don't mind them because, as quoted cost-of-living expert Ben Phillips noted not so long ago, Carbon Tax compensation more than alleviates the pain. Oh, the other expert Allard finds is Ipsos' Rebecca Allard, a "former ALP member who resigned in disgust at branch stacking." Missed out on pre-selection, did you, Bex?

Plus there is ex-Gillard butt boy Stephen Koukoulas and, just to round things out, Ross Garnaut.

Things are strange at the Silly, because after a news column that reads like an editorial, we get an editorial whose summation of Rudd's dire stocks reads like a news story, as it methodically lists all the mis-steps, lies, evasions and treacheries that will see the moon-faced psycho slapped silly and back again next Saturday.

But being the Silly, of course, facts aren't allowed to crimp a true believer's time-on barracking, as the editorial's headline demonstrates.

Email ThisBlogThis!Share to TwitterShare to FacebookShare to Pinterest
Labels: move to Newtown and everything will be lovely, Rudd can still win, The Silly gets the collywobbles, what are bastards complaining about