Wednesday is giggle night at the ABC, as opposed to Monday, when serious contemplation of the nation's affairs begins with 7.30, gathers momentum through Four Corners, accelerates past Media Watch and reaches its prolonged and soggy climax in Q&A, with Lateline always there to buff the afterglow of an entire evening's lefty lovefest. That you are more likely at the week's dawn to laugh, if that word can  be stretched to include the snort and scoff,  than atop its hump, when premeditated comedy is said to be on air, is further proof of the national broadcaster's general inability to fulfill its brief. It can't be that difficult to report honestly, and assembling a few titter-worthy gags would seem to be even less of a challenge. For example:

Knock, knock!
Who's there?
Fact Check
Fact Check who?
Only the Coalition, silly!

See, this joking business is fun and easy, but alas, quite beyond your average ABC humourist if Wednesday Night Fever is any indication. Amongst its other Labor-ed moments, and there were many, many of those, the show devoted a short segment to a pair of Kiwi inverts discussing their pending union. What fun! Thick accents, beanies, beer cans on the coffee table, moron grins and inbred absurdities. You can view the segment by going here and skipping through to the 15.50 mark of the video. The skit's protagonists and their set are freeze-framed below. 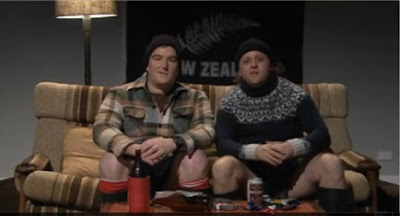 Now observe two other characters, Bob and Doug McKenzie, who hailed from Canada and appeared on American TV several decades ago. Notice any similarities?

Actually, there is one big difference.

Bob and Doug were put to air by a commercial network intent on amusing viewers, selling advertising time and making money. By contrast, their apishly copied Kiwi counterparts represent the ABC's primary mission, which is to spend public money without a concomitant obligation to produce a measurable return.

That must be why the McKenzie brothers are funny and the Kiwi couple anything but.
Posted by Bunyip at 1:47 AM

Email ThisBlogThis!Share to TwitterShare to FacebookShare to Pinterest
Labels: bob and doug mckenzie. consider how many taxpayers worked for how long to cough up the tax dollars underwriting this twaddle, wednesday night fever