Pain In The Arts

IN THE current edition of Quadrant, James Paterson suggests a strategy whereby Tony Abbott might win the culture war which John Howard lacked the stomach to prosecute with the resolve that campaign warrants. An appointment or two to the ABC board, the placement of a bona fide literary scholar in the Australia Council’s bookish precinct and a bit of eye-rolling at some of the “arts community’s” more ludicrous, publicly funded exercises in onanism and aren’t-I-so-daring indulgence – that was the sum of Howard negligible achievements. Paterson’s solution is simple: choke the funding. The luvvies will howl, but then they are always howling about something, so our next PM should not worry too much about aggrieved members of the Wanker-Australian community calling for his head or, because the Speedo uniform of volunteer lifesavers seems to amuse them so very much, burning bathing costumes on the front lawn of Parliament House.
They will do all of that and worse, but if Abbott sticks to his guns those demonstrations of artistic fury will do much to make his case and, as a guaranteed bonus, boost his standing with the electorate. The proof is in this morning’s edition of the Sunday Phage, where arts editor Raymond Gill has a look at the ten artists who “actually matter”, the ones “continually pushing boundaries, investigating new methods, forging new forms of expression, influencing their peers and shaping the way artists, curators and audiences might look at art in the coming decades?”
They compromise quite a crew, starting with “urban sculptor” Stuart Ringholt, who “explores the idea of embarrassment”, not to mention grants, by getting about in public “in the nude or with snot hanging from his nose.” 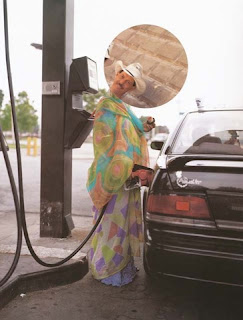 Ringholt: Your taxes at work
Then there is the woman, Bianca Hester, who installs live horses in galleries, exercises in expression whose significance Gill neglects to explain. Is the horse the art form or its manure? Perhaps, while Ringholt drips mucus and scratches his nuts, Hester could put trousers on the beast as an investigation of the bourgeois fixation with appearance. Hey, why not? If she were to leave large wads of cash sticking from Dobbin’s pockets, it would remind her audience of the government largesse that is so much part of her oeuvre. The Sunday Phage regards this pair and the other eight transgressive treasures as being figures of such interest and importance the introduction to their profiles needs to be plastered across the entire top half of the front page.
And that is the aspect of the art world Abbott PM needs to heed even more than the dubious works successive governments have funded. Simply put, there are no votes to be lost by cutting off the cash flow. The people who care are Age readers, of whom perhaps 1% might be tempted to vote Liberal. Back in 2005, when he was locked in a luvvie tussle with Robyn Archer, arts maven Gill unintentionally captured that delicious isolation from (and ignorance of) the broader community when he celebrated the government funding that is the mother’s milk of so many snot dribblers and horse installers:

….Archer overlooks some fairly obvious changes in Australia—changes she has herself brought about in her role as director of many of our arts festivals. She fails to note the proliferation of arts festivals around the country in the past twenty years, festivals that have brought work here that I would consider to be, in the main, innovative and tough. Such work has exposed audiences, critics and artists to ideas and work that they would otherwise have to travel as extensively as Archer to see. At the same time, substantial funds have been made available to festivals to commission, from local artists, new work that is precisely not the sort of ‘mainstream’ work we are used to seeing our state and national companies present in their annual seasons. There are now scores of artists who make work solely for festivals, not only in this country but around the world; another factor that helps bridge the gap between Australia and the rest of the world.

There is no enemy more vulnerable than one whose fortress is built upon a foundation of conceit. These people will be sitting ducks for a government carried into office on a wave of repulsion for the squandering and lecturing elites we have had to endure since late in 2007. Go ’em, Mr Abbott. Only The Phage will hear their whining above the cheers of those who must get up every workday morning, report to jobs many dislike and then see the confiscated fruit of their toil redirected by luvvie mates to luvvie mates.