ONCE AGAIN, with explanatory reports of those strange Americans’ attitudes toward guns filling Australian newspapers, our fine media organisations’ US-based reporters are hunting up just the right interview subjects to illustrate your typical redneck’s baffling reverence for the Second Amendment’s guarantee of the right to bear arms. This is a familiar exercise, repeated every time the latest nutcase opens fire on an assembly of dutiful and disarmed citizens, who have been stripped by law and local ordinance of the means to return fire. When intended victims are packing the means to defend themselves, well that never gets reported on this side of the Pacific, as such incidents ruin the narrative. Americans are just plain crazy, as every newly posted Australian foreign correspondent knows, so the journalistic obligation is to find just the right person to illustrate how very mad they really are. After all, we have never seen an armed lunatic in Australia. Well, not all that many, anyway.

Newly installed Fairfax correspondent, Nick O’Malley, has obviously studied the Correspondent’s Book of Standard Storylines & Protocols, because he ticks every required box in today’s report. His gun-loving nutcase is an elderly gent from Kennesaw, Georgia, with an unkept Santa Claus beard, a pistol on each hip and ready line in racist invective. Perfect! There are some 300 million Americans, and Dent Myers is O’Malley’s pick to represent them all. 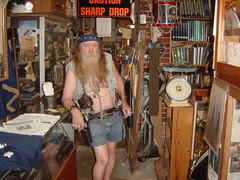 Just how representative is Myers? Why not listen to the man O’Malley quotes and make up your own mind. Be warned, though, Myers’ language is salty in the extreme and many will find the racial slurs he uses as a form of punctuation to be deeply offensive. If you have a strong stomach click here and take it all in.

O’Malley isn’t quite done with his check list. Having illustrated what American gun owners are like, he then explains the pernicious philosophy that produces them:

In the American imagination, government does not grant certain rights to individuals, rather individuals grudgingly cede some of their God-given rights in order to allow a limited government to be formed.

One should not draw too long a bow in seeing O’Malley’s version of the individual’s relationship with the state as entirely representative of the Fairfax mindset. Probably, somewhere in the company, there is someone, possibly a cleaner or cafeteria worker, who believes governments should answer to citizens and not the other way around.

But still, you have to wonder. It was just recently that media chieftains put their signatures to a letter opposing the Yabby’s plans to place further restrictions on free speech – a letter Fairfax conspicuously declined to sign. At the time, the suspicion at the Billabong was that the ailing company did not want to rile the government and jeopardise the possibility of some nice handouts to support that “quality journalism” stuff (like O’Malley’s, for instance).

Now, though, there seems method to Fairfax’s craven refusal. When leaning on media execs to fire troublesome reporters is no longer sufficient and speech restrictions are introduced, O’Malley will be able to re-visit the racist Myers and cite him as an example of that other American evil, the First Amendment. As government grants us our rights, expect him to be just fine with having even more of them withdrawn.

A FURTHER THOUGHT: If O'Malley needed an example of America's wicked gun culture, why didn't he visit the little kid who takes an AK-47 to show-and-tell? Opinion page contributor David Hirst would have been happy to give him the number to call.
Posted by Bunyip at 12:52 PM

Email ThisBlogThis!Share to TwitterShare to FacebookShare to Pinterest
Labels: how to be a US correspondent, nick o'malley, racist rednecks can be quite useful