ABRAHAM LINCOLN had his log cabin and Johnny Cash a shotgun shack, and so did our PM Gillard progress to greater lodgings from her humble start as a "young and naive" lawyer allegedly residing during a period of career crisis and romantic turmoil in this tastefully renovated double-fronted Victorian at 36 St. Phillips Street, Abbotsford. 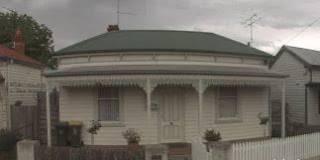 Just to re-cap, extensive renovations were done to the property while the nation's future leader was playing quoits with Cottontails and bedpost at light-fingered lover Bruce Wilson's nearby Fitzroy digs. When eyebrows were raised about the source of those funds, Gillard produced a hand-written receipt to support her assertion that the property did not benefit from a penny of her lover's ill-gotten gains.

That claim satisfied former News Ltd chief John Hartigan, who fired a columnist for doubting the PM's word, and saw Fairfax, which makes big noises about editorial independence, dispense with the services of broadcaster Michael Smith. As for the Fairfax dead-tree press and the ABC, those prisms of truth would focus their gaze on the former Chez Gillard only if it became clear that the home's  occupant had not recycled her rubbish.

But non-journalists remain interested in the property's history all the same, especially the Professor, who cannot help wondering if Phillips Street's longer-term residents remember their former neighbour and have memories to share about those long-ago renovations and the contractor(s) who executed them. Also a source of curiosity: during the PM's SATDAC period (slap & tickle/dilation & curettage), do they recall if the property was rented, which would put pay to the claim that Gillard was but an occasional overnight guest at Chez Wilson.

Anyone who has inspected the home's interior also is invited to decribe the built-in robes, which must be on the large side to have accommodated all those free frocks from Town Mode.

(Many thanks to reader Brooke for digging up Ms Gillard's former address from an old phone directory. Also, much gratitude to commenters who note that the street is actually St. Phillips Street.)

Email ThisBlogThis!Share to TwitterShare to FacebookShare to Pinterest
Labels: a nice place to hang a lot of free frocks, gillard, where it all began