Dammit! Must mop floor after all


AS the Billabong is located rather close to the shore of Port Phillip Bay, self-interest has meant that the news one hears of rising sea levels is treated very seriously indeed. It is quite the chore to mop the floor, so why bother if it is only a matter of time until a flathead takes up residence beneath the kitchen table? This sort of thing is already happening, or so we are assured, in other spots about the globe, most prominent of these being the scatter of Pacific atolls now known as Kiribati. Formerly, while a British protectorate, they were the Gilbert Islands, although that is not the name most commonly associated with their past. That would be Tarawa, the chief island and seat of government, where US Marines fought an extraordinarily bloody four-day campaign against entrenched Japanese resistance late in 1943. As a recent article at The Global Mail noted, the island remains littered with the detritus of war, including several large, century-old British-built guns, which the accompanying photographs  suggest, without actually saying in as many words, are being swallowed by the rising waters of carbon-addicted humanity’s indifference to the planet’s health. To further advance that impression, one of the emplacements is pictured at high tide and festooned with children, the cruel sea lapping at its very foundations. 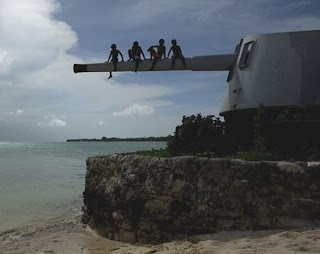 It's always high tide at the Global Mail..... 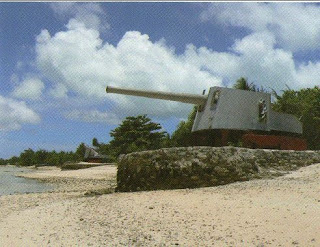 ...but not for those without a barrow to float

One cannot expect too much in the way of accuracy from The Global Mail, which is the plaything of Graeme Wood, an eccentric Tasmanian millionaire, generous supporter of the Greens and, most recently, sponsor of The Guardian’s bid to snaffle the small section of the population that still takes The Age and Silly seriously. If there is enlightment to be found at The Global Mail it is of a biblical nature, as Wood’s entrepreneurial success would seem to confirm Ecclesiastes’ observation that life just isn’t fair. “The race is not to the swift, nor the battle to the strong, neither yet bread to the wise, nor yet riches to men of understanding,” the verse advises. The strange fact that the Great Bunyip gives us cane toads, bleeding piles and an Internet entrepreneur overflowing with admiration for Christine Milne is nothing if not the confirmation that He has a very peculiar sense of humour.

So, one gathers, do the citizens of Kiribati, who must find it very hard to keep a straight face while conducting the latest representatives of the press on the ever-popular Drowning Island Tour. The Global Mail sent Bernard Lagan, but several years ago it was Adam Morton of The Age, a man who will believe anything and report nothing he has not been told by those who are gulling him. Visitors to this blog who share The Professor’s disinclination to mop the floor should take a look at both, as they will provide a persuasive case for the further avoidance of scrubbing and cleaning in all low-lying precincts.

Others, however, might care to consult this report, prepared in 2006, which deals at length with Kiribati’s changing shoreline. Climate change is not mentioned, not even once.

Morton of The Age stepped ashore not long before 2009’s Copenhagen gabfest, where Kiribati’s elders eyed the prospect of bagging large sums of other people’s money just as greedily as did their ancestors the arrival of tasty missionaries. “Kiribati hopes for billions of dollars from the countries responsible, to help it deal with the problem of climate change,” Morton wrote, apparently untroubled by the practicalities of accommodating all that cash in a country not much bigger than Luna Park. Had Copenhagen not devolved into the merciful shermozzle it did, we can assume the natives would still have been standing calf-deep in their lagoon, as no room would have been left ashore for anything but bales of banknotes.

Like Morton, Lagan appears also to have been jammed into a tinnie and shuttled off to a little spit of land that goes by the name of Tebunginako, where a village has been abandoned. First, Morton’s appraisal:

At Tebunginako, the money might have to be spent on another relocation. The village was rebuilt about 15 years ago, initially about 50 metres from the shore. It wasn't far enough. Each day at high tide a handful of houses and the village's biggest buildings - a dishevelled Catholic church and giant concrete maneabe - are surrounded by a saltwater moat as the sea flows in and floods what was once a fresh-water pond.

Lagan, too, visited the ghost island:

….one village, Tebunginako, which villagers have battled to save for the past 30 years from the encroaching sea, has had to be moved inland — a development that is often referred to as hard evidence that Kiribati is being ravaged by climate change. Tebunginako’s fate is held up as a barometer for the rest of Kiribati by the government, which facilitates the two-hour boat trip there for visiting journalists (including The Global Mail).

That would be the same government, remember, so keen to solicit billions of guilt-edged Western dollars.

So two reporters have seen the island, sloshed through the rising tides and both tell us for a fact that globalwarming/climate change/extreme weather (or whatever it is being called this week) is to blame. Who could doubt them?

The authors of that 2006 report, linked above and again here, for starters.

It turns out that the very name of the village's hinterland, Terawabono, is a variation in the local lingo on “blocked channel”, and it is this perfectly normal and typical example of foreshore dynamism that explains why the island is shrinking. But not by much, mind you, as the vanished sand is simply being moved elsewhere.

Ground truthing confirmed this hypothesis and later graphic presentation of the study to the Tebunginako community found general agreement that there was an oral history that such a channel existed (possibly about 100 years ago). Indeed the name of the land in the area immediately south of Tebunginako is Terawabono – “the blocked channel”.

The coastal instability experienced at Tebunginako is therefore an ongoing adjustment of this shore to the blocking of the channel and consequential halt of sand supply from the ocean to the lagoon beaches.

As to those billions of dollars Morton, Lagan and Kiribati’s leaders are so keen to see dispensed, the reports authors have a somewhat cheaper solution: move your grass huts to higher ground.

The people of Tebunginako have settled in areas which are unstable and the shoreline will continue to change over time for many years to come. Over the last 30 years the people of this village have spent a huge amount of time, energy and money trying to stop the natural movement of the lagoon shoreline. This has failed and much of the protective structures built have been destroyed by ongoing shoreline change and westerly gales.

In past times, people lived in harmony with shifting coastlines and their local buildings could be easily moved if the shoreline changed. Many of the houses in Tebunginako are still local but some large and important buildings (the village maneaba and church) are built of permanent materials and can not be easily moved.

During discussions with the people of Tebuninako Village it was agreed that the changes on their coast were caused by the blocking of the channel many years ago and that this coast would remain unstable for many years to come. It was also agreed that it would be better to use their time, effort and money to rebuild important buildings east of the road on high safe ground and not to try and rebuild seawalls.

It was understood that there was no need to move the whole village right way. In some areas accretion is occurring (the land is getting bigger) and so long as local houses are built in these areas, they could always be moved if need be. Certainly, permanent buildings should not be built anywhere west of the road and people in flooded areas should also be encouraged to move east of the roadway...

There is one other thing worth noting about Lagan’s account of death by carbon in the Pacific. It is his assertion that “as far back as 1992, a technical report, funded by the Canadian government, said increasingly severe El Niño events were producing the large waves that were eroding the Abaiang coast.” Because many Global Mail readers vote for the Greens and are self-evidently thick, Lagan adds that, “Only very recently — in the past year or two — have some climate scientists begun to suggest a strong link between severe El Niño events and global warming.”

The internet, being a wonderful thing, makes it very easy for the curious to dig up that report,  written by an erosion specialist, J.B. Holden. Here is what he says of el Ninos:

Although the lagoon shore of Abaiang is sheltered from the direct impact of the prevailing westerly winds, it is affected by occasional westerly winds associated with the occurrence of El Nino events ... There have been notable El Nino events in 1972, 1977-78, 1982-83, 1987 and in 1991.

It is possible that the westerly winds associated with these El Ninos have caused abnormal short-term erosion. Several severe El Ninos in succession could have caused more erosion than could be restored naturally in the interim.

Since El Nino events are natural and have always occurred, the westerly wind and waves are also natural events and the resulting beach fluctuations are part of the natural coastal process. These events can be expected from time to time and the beach should adjust naturally as it has in the past.

Or was it a case of those Kiribati PR persons handing out their re-written version of “the science”, along with a cut lunch and tickets for the two-hour jaunt to inspect the village drowned by carbon pollution?

Honestly, you couldn’t make this stuff up. Except they do, every single day.

Email ThisBlogThis!Share to TwitterShare to FacebookShare to Pinterest
Labels: bernard lagan, kiribati, mr morton is the market for a bridge and some unicorn horns, the global mail is sinking, warmists burn jet fuel to visit island their emissions aren't sinking