The Age digs its grave, not a tunnel


THOSE who reside in less fortunate parts of our great nation, which is to say everyone who does not live in Melbourne, may not be terribly interested in this post, which concerns one of those parish-pump issues whose ability to raise hackles diminishes in direct relation to observers’ distance from the epicentre of fuss. That said, quite a few universal truths are crystallising in the darkening blue over the Napthine government’s plans for an inner city East-West road tunnel, insights directly relevant to all who must live with the consequences of what the project’s opponents like to present as enlightened urban planning. This involves more bicycles and buses, needless to say.

The first insight to be gained from the current flap is the need to revamp the social sciences’ hierarchy of rubbish disciplines. Formerly, it could be assumed that the prime purpose of social work, at the very bottom of the heap, was to calm the career anxieties of those too dim to become teachers. The escalating tunnel spat has now demonstrated that town planners occupy an even lower rung, and a more political one, than both of those tax-gobbling sources of excuses for failure and diminishing returns.

The second – and this does not need to be mentioned, come to think of it – is that the Fairfax press will always allow its writers to filter and distort their reporting in accordance with personal prejudice and preconception. Let us take today’s reporting by Age state political editor Josh Gordon as an example. Notice the ellipses he has inserted in the passage below:

In its November 2011 submission to Infrastructure Australia, the government suggested that the road link would significantly benefit motorists using Hoddle Street, allowing traffic banked up along the Eastern Freeway to flow more freely.

''The east-west link … is aimed at … reducing traffic on Melbourne's inner urban arterial roads, especially at the Hoddle Street exit on the Eastern Freeway,'' the submission said.

Well here, in full, is what the report actually says. The bits in bold represent the few words Gordon chose to use:


The East West Link, in combination with other transport network initiatives, will support the longterm sustainable growth and development of Melbourne, and have state-wide benefits. The project is aimed at:

Contrary to the impression the Age’s account seems determined to create, that document does not pitch the East-West tunnel as the solution to Hoddle Street’s woes, which can be very woeful indeed at peak traffic periods, but as a remedy for the bottleneck that develops every morning when five lanes of vehicles from Eastern Freeway pour into the narrow, cyclist-infested streets of North Fitzroy.  The picture below represents any typical morning on Alexandra Parade, into which the Eastern Freeway empties. 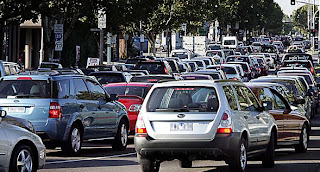 Gordon does note that, even so, a study supervised by Sir Rod Eddington estimated that the East-West tunnel would reduce Hoddle Street congestion by as much as 20 per cent, some 18,0000 vehicles a day, which might strike the unbiased eye as a worthwhile improvement. To Gordon, however, it is “only” 20 per cent and to be mentioned merely in passing.

Some time ago, a professional journalist dropped a line to the Billabong to note that space is an issue on the published page and that telling details sometimes fail to make to the cut for no reason more sinister than a lack of space. Point taken! But surely, as he selectively assembled his case against the sensible proposal to link one freeway, the Eastern, with another, the Westgate, Gordon could have noted the existence of those other arguments for a tunnel, even if he lacked the space to describe them in full. It would have required only a few words, something like "...while other arguments for the tunnel have been advanced...."

Instead, readers were treated to a double helping of ellipses and another example of why, in tabloid form or broadsheet, The Age cannot be trusted to report the truth.

Email ThisBlogThis!Share to TwitterShare to FacebookShare to Pinterest
Labels: greenies love traffic jams, the age at it again