It's In The Mail

A WALKLEY AWARD must be a very nice thing to have on the mantelpiece, where it might be displayed to visitors as proof that a reporter is master of all his or her craft's noble skills and fearless attributes. Accuracy, the layman might think, would be high on that list and, not far behind it, a professional disdain for presenting unsubstantiated gossip as verified fact.

If so, Channel Ten's Hugh Riminton will probably be on the way to the Post Office this very minute to send back his Walkley award. That would be the All Media Scoop Of The Year he shared with Channel Ten colleague Matt Moran for exposing the nest of sexism and Skype-worthy cadet-on-cadet action at the Australian Defence Forces Academy.

Here is one of the several reports on the matter which earned Riminton his occupation's highest honour. If time is short, go straight to the 5:00 minute mark of the clip, where you will see and hear the Walkley winner with the spirit very much upon him:


Breathless stuff, especially Riminton's assertions toward the end of the clip in regard to the female cadet's bastardisation "after she went to the media". Did you catch it all, that litany of torments the poor girl was forced to endure?

Upset at the gross injustice of it all? Well don't be, because not a Walkley-winning word of it is true.

Here is how the folks on Red Russell Hill summarised their investigation's findings, as reproduced this week in a press release issued on behalf of Defence Minister Stephen Smith:

In relation to specific allegations made in the media, the Inquiry found:
It is a pity the Finko & Rickety Review has finished its business, as co-author Matthew Ricketson would almost certainly have wished to include a few words about Riminton's inaccuracies in the finished document.

Ricketson, you see, has served five times as a Walkleys judge. Perhaps, when Riminton returns his Walkley, he should mail it straight to Ricketson, who knows exactly what to do when professional standards are not observed.

And if you think Ricketson needs to be reminded of ethics, the need for accuracy, the danger of unbridled enthusiasm and, most of all, the oddity of a would-be censor teaching journalism, let his boss know all about it:


UPDATE: If Riminton wraps up the Walkley, colleague Matt Moran can pay for the string, brown paper and stamps:


UPDATE II: Regardless of the reports' other deficiencies, does a scoop which cannot spell the name of one of the drama's chief players deserve to be honoured? 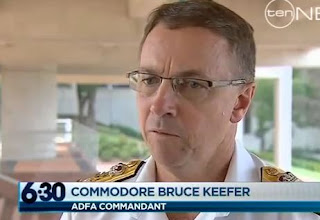 Just so Riminton and Moran will know when they express their regrets in a note of apology, it's "Kafer" not Keefer.

(many thanks to reader Learned Friend for reminding the Professor of Riminton's career-crowning accolade)
Posted by Bunyip at 2:14 PM

Email ThisBlogThis!Share to TwitterShare to FacebookShare to Pinterest
Labels: channel ten, defence scandal, hugh riminton, it's in the mail, matty ricketson, not quite right