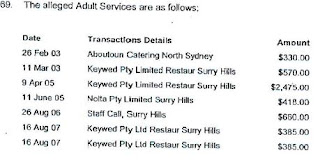 It should be noted that Thomson insists he could not have racked up those charges because he was often elsewhere when they were billed to his union's members. The auditors remain dubious, however:

"We are not satisfied that the mere fact that a service was recorded on the cardholder statement on a date when Thomson was not in New South Wales is conclusive proof that the service was not incurred by him, having regard to the not uncommon practice of credit card transactions being processed on days following the provision of the service to which the transaction relates and the possibility that the payments may have been made remotely."

Does one need to be terminally suspicious to see a possible explanation for ex-wife Crista's apparent determination to accompany her hubby on as many of his trips as possible?
Posted by Bunyip at 12:14 AM