They're Demented, Says An Old Fool

IN THE past month, Bob Ellis has copulated ten times, according to his announced and long-standing schedule. Over the same period he also has been screwed three times by The Drum's Jonathan Green.


Round midnight my wife will be home and will put up in these columns a piece on the events of Sunday and Monday and Tuesday which I got by agreement to Unleashed by Wednesday afternoon and they rejected because it was ‘several days late’ and ‘added nothing to our understanding of the events of the day’. This is the third piece in a month they have rejected but not told me they had rejected after asking for it or asking to see it and I suspect them of ill feeling or dementia.

That would be right, Bob. Anyone who thinks you are a drooling old fool with nothing relevant, rational or civil to say just has to be "demented" by definition.


Here is the sexed-up sexagenarian relaxing with his pal and onetime generous patron Mike Rann. 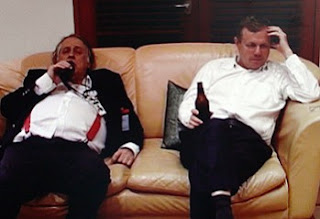 You can bet The Drum would not have rejected one of David Williamson's essays.
Posted by Bunyip at 11:27 AM

Email ThisBlogThis!Share to TwitterShare to FacebookShare to Pinterest
Labels: bob ellis, who's your daddy?