UPDATE: Andrew Bolt's comments threads are now looking much nicer, even elegant.  As for the rest of the site, well it is Murdoch's to do with as he sees fit, but surely his business plan did not include a bit about giving the dunderheads at Fairfax a windfall boost.

THERE IS a widespread perception on the Left of Rupert Murdoch as publishing's Doctor Evil, the very essence of omnipotent wickedness. It is a notion that has never enjoyed much currency at the Billabong -- and a good deal less this morning, which sees the unveiling of the Herald Sun's revamped website. If Murdoch really is that inter-galactical arch-villain, then he has placed Mini Me in charge of his web efforts

What a pig's breakfast!

On the Billabong's computer, Andrew Bolt's blog is all over the page in Firefox. In Chrome, other pages are spread out like Brown's cows. And just to complete the trifecta, this is how Andrew's formerly neat, clean and easy-to-read comments now appear in Explorer. 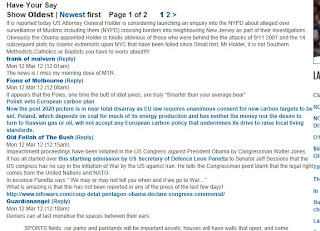 Inspiration! Murdoch IS an evil genius. The redesign must be part of an effort to repel readers, thereby establishing a potential defence before any government watchdog: We're not worth regulating because no one reads us anymore!

Oh, and one other thing. The site cannot even get its own star columnist's name correct: 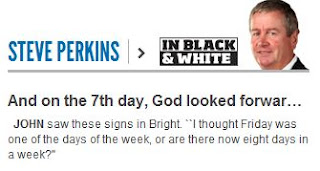 Memo to Herald Sun: Your employee's name is Perkin. No "s" needed or wanted.

It is a good thing Andrew Bolt is about to be appointed editor of the Age, where they won't be sticking his columns behind a paywall.

Seriously, it is 2012 and web-savvy developers cannot be that hard to find. Why has the Herald Sun placed its paywall project in the hands of the lady who formerly cleaned the toilets?

ADVISORY: Off to the golf club until early afternoon. Feel free to leave comments on this and other posts, but don't expect them to be approved until the sun is high.
Posted by Bunyip at 8:07 AM