THIS could be the biggest and nastiest academic biffo since Stuart Macintyre had Geoffrey Blainey ejected from the Parkville Asylum.
At Newcastle University, Professor John Maynard has just published a book, The Aboriginal Soccer Tribe, which insists Aborigines played a game called Woggabaliri, which the Silly’s Craig Foster reports is “the earliest known form of ball sport played by indigenous Australians and, according to the Australian Sports Commission, the game most closely resembled association football,” That is just a bit hard to take seriously, what with Woggabaliri sounding so much like “Wogball” you might be inclined to suspect the name was made up for humourous effect. Dispel that thought immediately, ye doubters and bigots. Maynard (below) is both a proud member of the Woromi People, possibly related to the Litijus-Mordy skin group, and chief of the university’s Wollotuka School of Aboriginal Studies. He is a man to be taken very seriously indeed.

Meanwhile, Melbourne Museum’s Dr Patrick Greene leans strongly toward the view that the very same band of Aborigines invented not soccer but Australian Rules Football, a claim reported four years ago in the Phage. What puts Maynard and Greene on a collision course is that each man cites the same 19th century etching as his proof. Here it is:

The etching was executed by German artist Gustav Mutzel, who worked from the sketches little-known German explorer Johan Wilhelm Theodor Ludwig von Blandowski brought home after ten years in Australia. A prolific penciler, Blandowski’s images could well spawn an academic growth industry as researchers identify many other examples of Ab-originality. It isn’t all that difficult to eyes not blinded by an invader’s prejudice. For example, here is the first incarnation of the Etihad dome:

Then there is cricket, which Aborigines also invented, as demonstrated by the two fellows in the background spreading covers on the pitch.

And rappelling, that is another formerly unrecognised Indigenous sport:

And their greatest achievement? Inventing the New Zealand rugby team. In addition to establishing why the squad is known as the All Blacks, this Mutzel/Blandowski rendering quite clearly captures one of the very first performances of the haka. And you thought the Maoris had something to do with it! 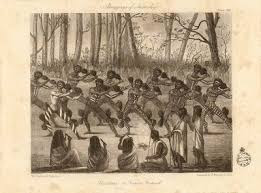 After those preliminaries, it was time for a scrum:

Off the field, Aboriginal achievements are no less significant, transgressive sculpture and a commitment to public art being the most obvious. That passion also is captured in the Mutzel/Blandowski portfolio:

And it is also quite clear that Aborigines occupied the City Square before it was built, even to pioneering the curious hand signals which the Occupist tribe has now revived:

These fruitful areas of inquiry await the entrepreneurial academic. All that needs to be settled is the matter of just how difficult it might have been to play either soccer or Aussie Rules with the triangular ball depicted in the seminal engraving. Some might even argue that it is nothing more than an incidental rock in the background.
Solving that riddle should be worth quite a few conferences and research grants in the meantime.
Posted by Bunyip at 10:45 AM

Email ThisBlogThis!Share to TwitterShare to FacebookShare to Pinterest
Labels: is there a sport Aborigines didn't invent?