THIS business of finding Victoria a new slogan, well what about The Hook Turn State? You turn right from the left lane down there? Well, yes, we do, matter of fact, and if you don’t quite get it, especially the bit about trams, well that’s too bad.  Make a goose of yourself at Collins and Elizabeth and then go home.
The way we do things here, it suits us, like the footy, which we invented, played and followed with absolute conviction as the rest of humanity embraced the shame of soccer. We didn’t care in that pre-Demetriou age if the world got our game or not, nor do we now as the AFL’s Napoleon weaves his schemes of global domination. GWS will fly or fail,  bleeding the League  of money and talent in the process, but either way it will not matter in the sport’s home town. If footy were to regress to suburb vs. suburb, ruckmen whose real careers were butcher or barrister, and rugby banished to beyond the Murray, well quite a few of us would think that an improvement.
If none of the above makes too much sense, stiff. You don’t come from Melbourne, so it doesn’t really matter. In this little corner, very nearly the last stop before Antarctica, we have our little ways. 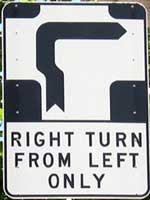 UPDATE: Come to think of it, installing a hook turn sign in Premier Baillieu's office would not be a bad idea. It might remind him why Victoria installed a Liberal government and why he really needs to put the wheel hard to starboard

UPDATE II: In comments, Deadman suggests also turning back the cricket clock with the re-introduction of the eight-ball over. It would be a splendid reform, but before we get to that,  a gross injustice from half a century ago needs to be admitted and the official record amended, preferably with an apology to the innocent victim, Ian Meckiff. Driven from the game as a chucker, his career was ruined by decisions that had a lot more to do with cricket's politics than the Victorian bowler's unusual action. The video below explains it all.