IT CAN BE quite the distraction when the squawking horde touches down and all the little dogs begin to bark, very hard indeed to concentrate amidst such a racket, so things which should be obvious are sometimes overlooked.  Such was certainly the case when Act I of The Punch & Tony Show preoccupied the quality press three weeks ago and stories of assaulted walls and fearful femmes filled all the news. McTernan’s gooseherds have moved the gaggle quite a ways since then, past Alan Jones and the Opposition leader’s responsibility for everything the compere says, to Julia Gillard’s climactic histrionics and, a couple of hours ago on Lateline, to the depths of our snot drop of a treasurer’s several refusals to disagree that Abbott is a woman-hater. Let them revel in the current shrieks and cackles until the next confected study in misogyny calls all on. For quieter and more reflective sorts it is much more interesting to turn back, enjoy the quiet and pick over the cold case of the Plasterboard Pugilist. Turns out a few things were overlooked.

The first is the selective eye of Laurie Oakes, so prominent amongst those who insisted Abbott had a case to answer for what he may have done as a 19-year-old. A rough nut then could be an even rougher one today -- that thought was implicit in the many words Oakes devoted to the faux scandal, as here:

Abbott’s aggressive style worries many voters. And it is claimed he has particular problem with women. The alleged intimidation of Ramjan combined both areas of vulnerability. Abbott could not afford to leave any doubt. He had to try to kill the issue off.
Deciding the truth or otherwise of the allegation comes down in the end to who you believe. It is Ramjan’s word against Abbott’s.
Abbott argues that, if the incident really occurred, Ramjan would not have waited this long to talk about it. But Sydney barrister David Patch, also prominent in student politics back then, says a “very shaken scared and angry” Ramjan told him about Abbott’s behaviour at the time.


If what people do (or are alleged to have done) at university bears so much on their lives of three decades later, why didn’t Oakes cite his own student days? You might have thought them highly relevant, given that Abbott’s violence is at best alleged while Oakes' eagerness to go the biff is a matter of the public record. From Honi Soit’s Letters to the Editor in 1963:

I was highly amused to read that Mr P. Blake (Arts II) was highly amused by my letter concerning the now famous Honi Soit Form Guide. I was particularly amused to see that Mr Blake accuses me of hypocrisy – so amused, in fact, that I would dearly love to punch the said Mr Blake squarekt on his flaring nostrils.


In the same letter, Oakes dismisses the future Mr Justice Kirby as “a fool” and grows strident about the presence of conservative students on campus.


Memory’s light must be dimming behind Oakes’ disapproving brow, because why else would he not have judged Abbott’s record against his youthful own? It is not as if he has an anti-Abbott barrow to push. Not that, surely not. 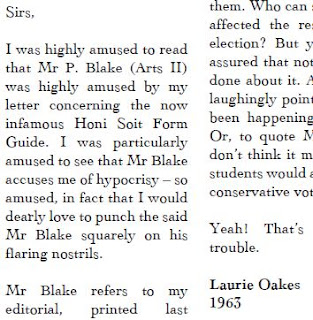 AND here is a second passed-over nugget, one that might just have changed perceptions about another of Agro Abbott’s out-of-the-woodwork accusers, perhaps raised doubts that he made a credible corroborator. It is that fellow David Parch, cited by Oakes (above) and many others, as a supporting witness to a young conservative’s thuggery.

Funny thing, though. Even though the following information is readily available in the Silly’s electronic archive, no one thought to mention that Patch has such a habit of sooking about violent Liberals that he he has even accused Malcolm Turnbull of physically abusing him. Yes, Macho Malcolm! (Snort, snigger, chortle and all that.) From the Silly of May 9, 2004:

Mr Turnbull's invective is well known to Mr Patch. He remembers a spring night 29 years ago within the confines of Sydney University when they sat across from each other as student politicians.

Each was a candidate for president of the Students Representative Council. When Mr Patch stood to state his policies, he said Mr Turnbull heckled and interrupted him relentlessly.

"I tried to go with the flow," Mr Patch said. "When he got up to speak, I returned the favour, interrupting him. He got angrier and angrier and then suddenly he lunged at me. His left palm hit me in the upper chest. Before he could hit me with his raised right fist, I sprawled backwards."


It might have made some difference if those easily sourced tidbits about Abbott’s detractors had come to light at the time. But they didn’t, and all the quality journalists do have an excuse. With more counterfeit charges and smears to be laid, there are many more salient facts and perspectives forever in need of overlooking.