EARLIER THIS year, ratings collapsed for the Canberra edition of ABC's nightly news, but not to worry, as the senior news executive, John Mulhall, assured the local rag, "'I don't think it means any startling changes, and one thing we do know is that ABC audiences don't like change, or not big change or sudden change.'' Rejoicing in the national broadcaster's immunity from the tawdry business of turning a profit, which tends to concentrate the thoughts of commercial operators, the quality journalist continued: ''We have no plans to change anything but we will certainly be looking at what we are doing and we will be trying to get some quality audience feedback and we'd be more than happy to hear from our audiences."

Well some viewers, anyway, and recent correspondent Bill Parker evidently falls in the less-welcome category. Mind you, it might have been Parker's topic which inspired Mulhall's explanation of what, to an ABC journalist, constitutes a story worth reporting. Via Michael Smith, whose blog continues putting mainstream organs to shame (emphasis added at the Billabong):

Thank you for your email regarding Mr Blewitt's statements. The ABC is aware of these statements but we do not at this stage believe it warrants the attention of our news coverage.

To the extent that it may touch tangentially on a former role of the Prime Minister, we know The Australian newspaper maintains an abiding interest in events 17 years ago at the law firm Slater and Gordon, but the ABC is unaware of any allegation in the public domain which goes to the Prime Minister's integrity. If indeed Ms Gillard has had questions to answer, ABC News reported those answers from her lengthy media conference of 24/8/12 in which she exhausted all questions on the issue.

However, if any allegation is ever raised which might go to the Prime Minister's integrity, the ABC would of course make inquiries into it and seek to report it. As for matters concerning Mr Bruce Wilson, ABC News will cover the case against him as it proceeds.
Once again thank you for your query.

Your taxes at work, folks. Or rather, not at work -- and unlikely to start work anytime soon.

UPDATE: How to explain a news director so determined not to pursue news? Close association with Canberra University academic and Finko's get-the-gag offsider Matthew Ricketson may help to explain such selective blindness.

Mulhall is the bloke with ears on the far right of the back row. Ricketty is two empty spaces to his left. 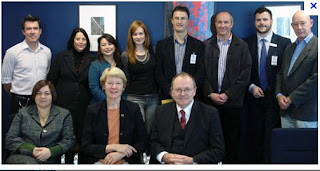 Email ThisBlogThis!Share to TwitterShare to FacebookShare to Pinterest
Labels: John Mulhall, michael smith, they haven't screened a worthwhile thing since Bellbird went off the air, why the ABC won't cover Gillard's involvement with a scam artist