UNEMPLOYMENT in Australia was a up a notch or two the last time someone had a look, and as it seems likely the next set of numbers will show a further increase there is reason to rejoice that at least one sector of the economy is doing quite nicely, opening employment opportunities aplenty for those appropriately qualified.  Despite what our Prime Minister would have us believe – and she always has a fresh tale to test credulity – it is not the manufacturers of solar panels or wind turbines who are leading the way, but the men and women of letters and literary festivals. Mining projects are being shelved, large fishing vessels beached by edict, car plants idled, and rural industries apt to be hobbled by a little Four Corners footage and the caprice of a minister’s instant export ban. But for those with the write stuff, doors continue to fly open.

There is young Chip Rolley, for starters, whose tenure at the Sydney Writers Festival melded almost seamlessly into a fresh career atop The Drum, where he is evolving the art of boldening  pioneered by the sainted Margo. Into his giant shoes now steps the festival’s latest director, Jemma Birrell, who has acquired the sort of pedigree that really, genuinely, impresses those who hand out such jobs and other fruits of the government largesse that underwrites them.

First, she knows Frenchmen, which is always impressive to a certain kind of provincial mind. Second, she has worked in Paris at a famous bookshop, Shakespeare and Company. And third, Jemma seems to have formed all the correct opinions while setting out the chairs and cubing fromage (not to be confused with cutting the cheese) for her Gallic employer’s weekly soirees. There was also an on-again/off-again lit fest Jemma had a hand in organising and which appears to have been her chief recommendation for landing this nice little gig back home in Sydney. One gets a taste for the, er, spirit of those gatherings on the Rue Wankére from this cartoon of a typical FestivalandCo crowd. 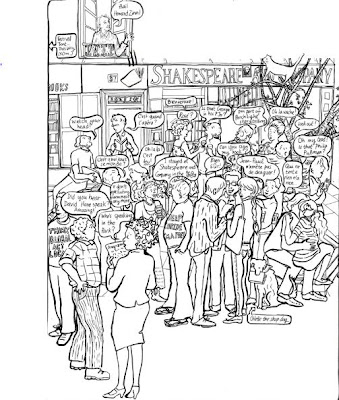 Do note the chap shouting from an upper window in praise of Howard Zinn – yes, that Howard Zinn – so we can picture Jemma's Paris parties as a Sydney Writers Festival writ small. Very small, in fact, judging by the dimensions of the tent that hosted a recent FestivalandCo, er, crowd. 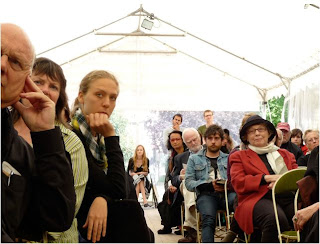 The press release announcing Jemma’s appointment  tells how she “moved to Paris to join Shakespeare and Company, one of the world's most famous bookshops”, which rather gives the impression of having been head-hunted from the wrong side of the world. Well that is the first thing Jemma will have to reconcile, because her own version of events is somewhat different, more a tale of backpacking than business class:

“When I first arrived in Paris five years ago I had no plans, no job and didn’t know a soul. Everyone I met was a friend of a friend and I went from there to gradually build a life on the other side of the world.

In Australia I had always worked with books, spending years in bookshops and then publishing, so in Paris I was determined to hunt down something similar. I wasn’t too daunted. This was one of the rare cities of the world that revered writers and the arts and still had hundreds of bookshops in every corner. After meeting George and Sylvia Whitman I started at Shakespeare and Company….”

Anyone interested in following Jemma’s career path might want to check the Paris bookshop’s hiring criteria – but, please, not if you know how to spell, because it is quite clear Jemma or someone now working for her could use a little help. From that same press release, a single paragraph (with needed corrections in bold):

Two French ladies who are bouquinists [bouquinistes] (selling books in stalls along the Seine) and write crime novels together under the pseudonym of Claude Izner were extraordinary, launching into song and telling us stories about old Paris. I felt honoured to present three Pulitzer Prize-winning novelists: Paul Harding (who used to be a rock star[,] incidentally), Robert Olen Butler and Jennifer Egan – they were all so warm, generous and fascinating. And at the literary festival I worked on, FestivalandCo, there were so many highlights: having an event in Paris’s opulant [opulent] Hotel de Ville with Paul Auster, Siri Hustvedt and Charlotte Rampling was pretty special, as was listening to Beth Orton performing new work in an convent from the 14th century.

Everyone can mistakes, even Bunyips, so no biggie on that score. But other flaws, well, they may be of greater concern to those cynical souls who have come to regard the SWF as seldom more than a publicly funded jamboree for the trough-licking left. Here is Jemma describing one of her favourite writers and inspiring moments:

The author event I was most moved by is....
Listening in awe to the stories of the eloquent French résistance fighter Stéphane Hessel, who is close to one hundred years old and knew Picasso, Breton, Duchamp, and Sylvia Beach, the publisher of Ulysses … His call to arms about the necessity of speaking out and taking a political stand was so inspiring, and he is one of the most moving men I have ever had the honour to hear.

Oh, that Hessel fellow is inspirational, alright – inspirational if you sympathise with Occupists and believe that camping on bitumen amidst squalor and slogans will remedy the world’s woes.
And inspirational, too, if you are not so fond of those jackbooted Jews. From the “inspiring” Hessel’s most recent literary offering, Indignez-Vous!, which is couched in the special ambivalence that is as mother’s milk to French intellectuals. He is against terrorism, you see, but finds it entirely understandable that others are not:

I know that Hamas, which had won the last legislative elections, could not help it that rockets were launched on Israeli cities in response to the situation of isolation and blockade in which Gazans exist. I think, naturally, that terrorism is unacceptable; but it is necessary to acknowledge that when people are occupied by forces immensely superior to their own, popular reaction cannot be altogether bloodless.

Does it serve Hamas to send rockets onto the town of Sderot?

The answer is no. This does not serve their purpose, but they can explain this gesture by the exasperation of Gazans. In the notion of exasperation, it is necessary to understand violence as the regrettable conclusion of situations not acceptable to those who are subjected [to] them.
Thus, they can tell themselves, terrorism is a form of exasperation. And that this "terrorism" is a misnomer.

One should not have to resort to this exasperation, but it is necessary to have hope. Exasperation is a denial of hope. It is comprehensible, I would say almost natural, but it still is not acceptable. Because it does not allow one to acquire results that hope can possibly, eventually, produce.

Hessel is probably too old to make it to Australia at his admirer’s invitation. But not to worry. There are plenty more like him and it seems the SWF’s new honcho-ette is just the person to make sure our pipeline of leftist literary tourists continues to flow without interruption.