BLAME it on an older Bunyip's sense of outraged propriety, but of all the assaults on common sense and honesty mounted by ardent warmists the one that continues to grate most of all is that Hungry Beast rap video, "I'm a Climate Scientist". Now it is true that much larger sums have been squandered on spurious science linking minute twitches of the mercury to all manner of earth-threatening ills, from peculiar fish to the clustered incidence of bearded dwarf women and so forth. But in its own small way, the ABC-funded clip captures every single reason why careerist climateers are to be despised.


There is the adolescent arrogance of the exercise first of all. With only one or two exceptions, the performers are hardly better than children, and there is nothing quite so tiresome as being hectored by a self-righteous teenager. Then there is the ABC's abuse of its charter, which does not include an obligation to bathe viewers and listeners in streams of obscenity. But most of all, what crawls furthest up an adult's nose is the sneering of a kind that so often drips from the lips of those who believe themselves so much smarter than the rest of us.

Now, at last, the recent collapse of the Gergis et al paper has provided some delicious consolation. Remember, when not shouting about "sucking d*** in Copenhagen" or using "mother****er" as a form of punctuation, the climate rappers' oft-repeated refrain is that their work is "peer reviewed" and must not therefore be doubted or dismissed.

Well isn't that just rich! Amateur rapper and blonde climate careerist Ailie Gallant is one of the co-authors of the discredited Gergis paper, which had sailed through the revered peer-review process and was poised for publication when it was noticed -- by whom remains a matter of considerable debate -- that the paper's claim of Australia never being hotter was based on the entirely wrong set of numbers.

Here is a still from that vile video. It is of Gallant, who could have made a useful career posing for Ralph, but instead chose to waste her life crunching numbers about growth rates of Balinese coral and insisting they tell us much about the ancient climate of Tasmania. Don't laugh, that is the sort of link the Gergis paper claimed to have established beyond doubt and scepticism. 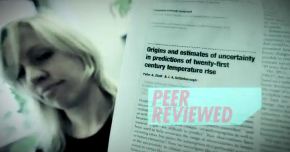 A picture is worth a thousand words, as they say, and this one tells us everything a taxpayer needs to know about the credibility of the peer-review process and more tellingly, those who hang their hats upon its rotten peg.