Much To Be Said for Beemers and Audis

BRIEFLY and without boasting, a Mercedes once sat in the Billabong's driveway. It was a long time ago and the car, acquired secondhand, older than that. The vehicle was a smooth ride, comfortable, smelled of leather, and met with approving glances when driven to Old Boys functions. Particularly appealing were the doors, which closed with a satisfying crunk, yet none of those virtues were quite enough to win the absolute affection of a young Bunyip whose breakneck passion was for caning down dirt tracks at top speed in the middle of the night. When it came to fun, a clubman-prepared Datsun 1600 with a 240K gear box, worked suspension and a lot of additional oomph-ifiers under the bonnet left the big Hun for dead. 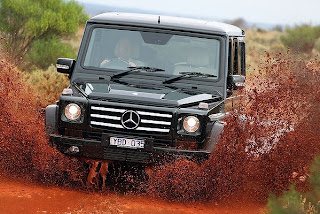 That is not to say another Merc would be shunned. This model, for example, would be a most welcome addition to the garage, especially if equipped with a fishing-rod holder, stowage straps for deck chairs, camp mattress, cooking gear and tent. Age not only puts the handbrake on reckless pursuits, it also opens broader vistas and new appreciations. When the bush beckons these days, it asks to be taken slowly and without a crash hat.

But there is a problem that pretty much rules out any purchase of that handsome G-55 (above). The problem's name is David McCarthy, the company's PR mouthpiece in Australia, who has been very hissy of late about Alan Jones. Not only has he issued press releases asserting that his employer is yanking its 2GB radio ads in response to the host's surreptitiously recorded remark, he has also been quite loud in demanding that Jones return the loaner he has been driving.

Such vehemence always seemed odd. One would guess that Jones' listeners are far more likely to buy and drive Mercedes than the GetUp tragics now pumping out threatening emails to 2GB's advertisers. If Mercedes felt compelled to yank its advertising, surely it would have been a better policy to do so quietly? Instead, McCarthy has broadcast his employer's disdain more widely than the signal of JOY FM, of which he was, until recently, chairman of the board.

Well it turns out, as Mumbrella is reporting, that Mercedes' decision to abandon Jones' show predates the radiohost's unfortunate remarks at Sydney University by some two months, and this makes McCarthy's much-quoted contempt for Jones all the more peculiar. Could it be that he has a private, deeply personal, agenda to push and that, just maybe, he has been using his position with Mercedes to advance it? Do you reckon he saw an opportunity to use his employer's name as a cudgel for beating up on Jones and that the PR man appropriated the car maker's prestige and market prominence for his own ends?

They are questions Mercedes execs most likely will wish to consider if even a few Jones listeners opt for another marque, but curious minds can still cast about for an unofficial explanation. 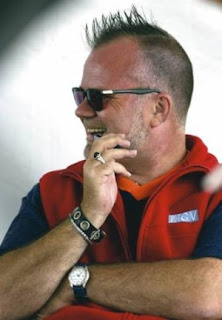 One of these, it turns out, may be that McCarthy (above) is an ardent and loud gay-libber, not that there is anything wrong with that. Indeed, good luck to him for being part of the movement that has transformed the love that dare not speak its name into the one that never shuts up.

Could it be that Jones' fuddy-duddy persona has got up McCarthy's nightie? Or perhaps, as a fellow who boasts of being out, proud and loud in the office, McCarthy believes that Jones, thought by many to be gay, has shirked a moral obligation to caper openly at the Mardi Gras Parade and use his microphone to advance the cause of adjectively qualified marriages?

We will never know, although Mercedes execs may soon have a good idea when they begin asking some questions.