IN TODAY's Australian (and at Quadrant Online, sadly), Change.org's Tony Roberston is given space to defend what he depicts as the near-absolute integrity of the software behind that petition which is said to have amassed in excess of 100,000 signatures, all demanding that Alan Jones' right to speak be terminated. Marvelous little bits of secret squirrel coding and other wondrous wotnots are forever rooting about in the entries, he says, all working tirelessly to stop imaginary people (and kangaroos and puddings) registering their opinions.

All these safeguards are the stuff of top-secret tech, but we need not take Robertson solely at his word because the public spirited Perry Stalsis, who launched another recent online petition, has snapped his email in-box and sent the image to the Billabong. His goal is to allay any doubts he is as real and trustworthy as, well, change.org online petitions and those who sign them. In this instance Julia Gillard, Santa Claus and Peter FitzSimon have validated his existence by throwing their weight behind the campaign to make Butch Carlton fork out cold, hard cash to have his columns printed in the Silly. If Mrs Claus' name and comment appear, expect to see a warning that her husband is one married man our Prime Minister should leave very much alone. Click on the images to get larger, readable pictures, then hit the back arrow. 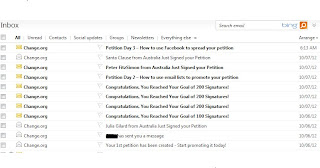 The second piece of evidence will not be refuted, certainly not by quality journalists. It is a letter congratulating Perry on having attained his first two hundred signatures. If only poor Perry was hooked in with GetUp he would probably have 20,000 signatures by this stage. Still, 200 names in two days is not a bad effort for one little petition mentioned only once on a single blog (this one).

Here is the text with an biographic link added:

Congratulations again on this incredible accomplishment!
- The Change.org Team

And here is the original:

All the quality journalists believe absolutely in online petitions and so should we all, especially Fairfax Media's board.

Email ThisBlogThis!Share to TwitterShare to FacebookShare to Pinterest
Labels: change.org, online petitions, open the memory hole, this won't be mentioned too often in future, will quality journalists heed the one about carlton